It took me a few weeks to read Blake Bailey’s exhaustive and exhausting (770 pages tip to tail) biography of John Cheever.  Living with Cheever even for a month was no picnic: as his wife or children would tell you.  He was a depressive, conflicted alcoholic, notably “enchained within the prison of self” even for a writer: when his children read some of the thousands of pages of his journals after his death, what shocked them was not the detail of his homosexual lusts and affairs (“If I followed my instincts, I would be strangled by some hairy sailor in a public urinal.  Every comely man, every bank clerk and delivery boy, was aimed at my life like a loaded pistol”), but how rarely he mentioned his family. 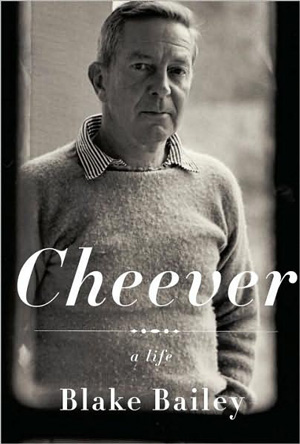 Blake Bailey is one of a handful of people to have read the thousands of pages of journals, and I don’t envy him his work.  I do however look forward to reading the selection from them – 400 pages, about a tenth of the total – which has recently been reissued in the UK along with most of Cheever’s fiction.  The fiction, after all, is what all this is about, and as with his previous subject Richard Yates, Bailey seems scandalized that Cheever is rarely read these days.   In 1979, a year after his Collected Stories was issued to fanfares (“not merely the publishing event of the ‘season’ but a grand occasion in English literature,” said one critic), Cheever was ranked third in a survey of American writers most likely to be read by future generations, after Saul Bellow and John Updike.  (The rest of the top ten was E.B. White, John Gardner, Bernard Malamud, Joseph Heller, Isaac Bashevis Singer, James Michener and J.D. Salinger.)  Presumably Roth would now be there in Cheever’s place.

What do we expect, though, when even Bailey rates Cheever has having written only “five or six of the finest American short stories” out of his hundreds-strong output?  (He had 121 published in The New Yorker alone.)  As to the novels, all are ‘problematic’ (agreed), but Falconer is the best (also agreed).  Bailey is an astute critic, and his commentary on some of Cheever’s best stories such as ‘Goodbye, My Brother’ is valuable.  But this is not Cheever: A Critical Study: so what of the life?

The life very directly informs the stories.  Cheever’s fictional milieu – the festering underbelly of respectable suburbia – is his life in a nutshell.  The “profound ambivalence with which Cheever beheld the world” and which he injected into his stories, came from the ambivalence with which he beheld himself.  He described in his journal “the familiar clash between my passionate wish to be honest and my passionate wish to possess a traditional past”.  He claimed vaguely aristocratic lineage but his parents had fallen on hard times, much to the bitter regret of his father, who wrote in his own journal, “The desire for money most lasting and universal passion … Desire ends only with life itself.  Fame, love, all long forgotten.”  Cheever himself, the younger of two brothers, was not planned.  “As my mother often pointed out, she drank two Manhattan cocktails that evening.  Otherwise I would have remained unborn on a star.”

His father’s “desire for money” was firmly implanted in Cheever.  He wasn’t free of financial worries until the success of Falconer and the Stories in his late sixties, and when he switched publishers he wrote to Robert Gottlieb, his new editor at Knopf, apologetically:

I’m afraid I was a nuisance about money, but I have this nightmare where I push a supermarket wagon across River Street – macaroni and cold cuts – and am either run down by Roth in his Daimler or buzzed by Updike in his new flying machine.

He had reason to be concerned: unknown to him, his rate at The New Yorker was around half that of Updike’s, and he was happy to sell stories to Playboy instead.  “They pay well and are hospitable, and the tits aren’t any more distracting than the girdle advertisements in The New Yorker.”  Increasingly, in fact, he had no choice, as his old home began rejecting his stories (“my long love affair with The New Yorker seems like an unhappy marriage, repaired now and then with a carnal exchange, a check”), as his editor William Maxwell became leery of anything that strayed from strict realism.  “If you don’t grow and change he baits you; if you do grow and change he baits you cruelly.”

This didn’t help his self-doubt (one of his psychiatrists – a phrase that tells much – wrote that Cheever’s “major personality trait is his narcissism, and underneath it all is tremendous self-doubt”) and his envy of his literary peers.  Names like Irwin Shaw and Eddie Newhouse, wildly successful as Cheever struggled, are not serious contenders now, though he raged at the popularity of Salinger’s Nine Stories against his own first mature collection The Enormous Radio; and was only mollified when he realised, from Salinger’s increasing eccentricity in his later writing, that his rival was “very close to crazy”.  He deplored The New Yorker’s fawning over Donald Barthelme, who seemed to him to be getting away with less subtle versions of the sort of thing that he had had rejected from the magazine years – decades – earlier.  Writing blurbs for pre-publication was “the mortal boredom of reading the fourth-rate novels of my drinking companions”.  His primary ongoing – and one-sided – love-hate relationship, however, was with Updike, ‘the other John’.  Envy for other writers’ success – a normal enough trait – lasted even to his literal dying days, when he wrote:

That I am not on the bestseller list [for Oh What a Paradise It Seems] and Anne Tyler is makes me think myself a forgotten creature in the vast cemetery where the living dead of those who have lost their vogue wait out the last, long year of their time on earth.  Up yours.

(The only contemporary he had unalloyed admiration for was Bellow, whose writing gave him “the experience, that I think of as great art, of having a profound chamber of memory revealed to me that I had always possessed but had never comprehended”.  There is light relief too when we read of how Cheever was awarded the William Dean Howells medal through rivalry and score-settling among the judges, major figures in the literary world.  “I had lunch with Ralph Ellison and asked him if he knew what sonofabitch had put me up for it.  He said angrily that it was he and that it had been uphill work.”  The reason Cheever was awarded it instead of Bellow, in the end, came down to an old grudge over Ellison stepping in Bellow’s dog’s shit.)

With Tyler and Updike, he may have envied their facility, turning out novel after novel as he struggled for almost twenty years with what would eventually become The Wapshot Chronicle (his original publishers asked for their advance back after nine years).  Even then, the result was more like a series of stories than a novel, though this was not lost on Cheever, whose self-laceration was at its height as he awaited a critique from Harper’s (“I can’t wait to lay my hands on this and lose my temper”).  Then again, “one never, of course, asks is it a novel?  One asks is it interesting.”

He was no more satisfied with his home life.  He “loved being a father in the abstract, but the everyday facts of the matter were often a letdown.”  He feared his elder son Ben was homosexual, and hated daughter Susan’s struggles with her weight (“if only she looked right, everything else would follow”).  He took her to see a classical guitarist “hoping to prove to her that the pleasures of respectability are not necessarily boring.  I think she was impressed although there was a certain amount of pushing at the sandwich tables.”  Little wonder then that, later, he felt he didn’t understand her at all.

I’ve fed her, bathed her, taken her up in the night, plucked thorns and splinters out of her feet, loved her  … but now when I speak to her she weeps and slams the door, hides in the woods on a fine Sunday morning, seems on the one hand merry and on the other to carry some unanswered question.

He was cold to his wife, who in turn shunned him sexually.  The “only place I’ve ever felt at home” was Yaddo, the writers’ retreat, though that may have been something to do with the presence there of personable young men such as Allan Gurganus, and the activities easily available (“I have been sucked by Ned and others in almost every room, and tried unsuccessfully to mount a young man on the bridge between the lakes”).  This conflict – between home and homosexuality – can have only worsened his drinking problem: by his mid-forties, he was “longing for the ‘noontime snort’ in the middle of the morning”, and by his early sixties he was so far gone that he had to be straitjacketed while in hospital for heart problems, to prevent him from escaping to go drinking.

When he finally attends Alcoholics Anonymous and successfully gives up drinking, the reader feels a great weight lifting, and almost wonders how we can get through another 200 pages after such a dramatic ‘ending’.  But Cheever, to his family, became worse when sober: “boring and insufferable”, though at least he had his greatest critical and commercial successes to come, with Falconer and the Stories.  This, at last, was corroboration for what he had always known about which side of the line he fell on.  From the journal:

You and I will get along without the awkward and the ugly.  They will ring your doorbell; they will bring you roses and pears; they will invite you into steerage.  They disguise stupidity with seriousness; they sneer at the wit and grace they miss. … So the bores travel through infinity, a little below the waterline.  Don’t deceive yourself with illusions of equality.  There is brilliance and there is stupidity.

It also gave him the public approbation he craved, even if he wrote about it in letters to others more flippantly than in his journal.  “There are a few PR demands on my time.  Yesterday afternoon Mrs Vincent Astor sucked my cock in Caldors window for the benefit of the New York Women’s Infirmary and afterwards I autographed copies of the collection.”  The jokes don’t hide much, however.  Finally, Cheever: a Life is engrossing but saddening, more monument than document, and a thorough investigation into how “a man can be given nearly everything the world has to offer and go on yearning.”