It’s always heartening to see a publisher get behind an overlooked writer, particularly when they’re helping us (re)discover writers outside our usual English language limits.  Pushkin Press, for example, have done admirable work in resuscitating the literary corpse of Stefan Zweig. In the UK, Sort Of Books have been reissuing – or in some cases commissioning first translations – of the adult fiction of Tove Jansson, best known for the Finn Family Moomintroll series of children’s books.  Two of the titles have also been picked up in the US by NYRB Classics, who use Jansson’s original cover illustrations. 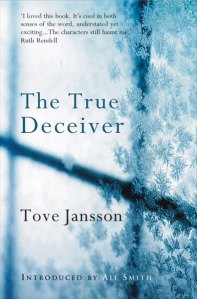 The True Deceiver (1982, tr. by Thomas Teal, 2009) drops the reader in the middle of a Finnish winter, where in the village of Västerby, “it had been snowing along the coast for a month … never stopping for even an hour.  … The continuous snowfall carried with it an imprecise darkness that was neither dusk nor dawn.”  Ideal conditions, then, to introduce the character of Katri Kling, a young woman who lives with her brother.  Katri is trusted by all in the village (largely for her numerical skills), but is cold and unclubbable.  When she offers to take the mail up to the home of reclusive writer Anna Aemelin, her exchange with the village postman is illuminating:

“Are you trying to help?”

Katri’s purpose, stated in the opening pages of the book, is to work her way into Miss Aemelin’s life, and for her and her brother Mats ultimately to live in her home, a lighthouse known as “the rabbit house” after Miss Aemelin’s celebrated books for children.  (She “could render the ground in a forest so faithfully and in such minute detail that she missed not the tiniest needle.”)

The trouble with Katri is that she doesn’t seem to know when to rein in her ‘honesty’.  When once she brokered a deal between feuding families, she “helped both save face, but she also articulated their hostility and so fixed it in place for all time.”  As one villager puts it to another, “Why do you go to her?  Yes, she puts your business to rights, but you no longer trust anyone when you come back.”  Miss Aemelin objects to Katri pointing out how the storekeeper has ripped her off for a few pennies: and anyway, Katri has a grudge against the storekeeper, which may be clouding her judgement.

The beauty of The True Deceiver is how it fits so much into 180 pages, without making any of the elements seem discordant.  Katri is paired with her brother Mats: he is as “undisturbed in his clean, simplified world” as she is troubled by her mistrust of others.  He reads boys’ adventure stories, while she urges him to read what she considers to be literature: “I read them, I do,” he tells her, “but I don’t get anything out of them.  Nothing much happens.  I understand they’re very good, but they just make me sad.  They’re almost always about people with problems.”

For this Mats has an ally in Anna Aemelin, whose children’s books are considered charming by some, and ‘”stereotyped” by others.  She shares his love of escapist books, seafaring adventures mainly, and Jansson sets her in opposition to Katri in a power struggle for control of Anna’s house, trust in the villagers, even the loyalty of Katri’s dog.  The assistance which Katri offers Anna, such as with her finances, is primarily for her own benefit, or at least satisfaction (“Every time she wrote a captured sum of money into her notebook, she felt the collector’s deep satisfaction at finally owning a rare and expensive specimen”).

It’s not difficult to see Anna Aemelin and Katri Kling as representations of the warring instincts in Jansson (who lived in solitude): a successful children’s writer who nonetheless spent the last thirty years of her life writing darker adult books (like this one); the two characters’ respective approaches to the fan letters Anna receives from her readers are illuminating and even amusing (“Politeness can almost be a kind of deceit”).  What unites Anna and Katri is that they are both isolated, one by her fame and success, and the other by her distrust of people.

The True Deceiver is as oxymoronic as its title: calm and clear in its prose, but turbulent in the emotions depicted; a seemingly simple story which resists bashing the reader over the head with obvious conclusions.  It is a perfectly brittle, crystalline tale for the cold winter months ahead.