I often bang on here about liking older books more than new ones, but inevitably the ones I read are old dressed up as new.  Here’s another one from the venerable Penguin. The publisher is soon to celebrate its 75th birthday, and has reissued a score of books by British authors which “represent their time and helped define their generation.” Well, maybe, but there are some interesting, lesser-read-these-days writers in there (John Mortimer, Penelope Lively, William Cooper, Margaret Drabble) and they’ve been given a decent format – all reset in uniform type with new introductions by contemporary novelists – and covers of varying quality (love the John Squire 80s ones, but the less said about Zandra Rhodes’ 70s, the better). I went looking for them in my local Waterstone’s and was horrified to see that they were stocking only three titles, so went to WHSmith and was surprised to see they had almost a full complement. 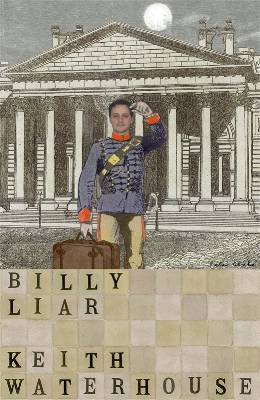 So I bought one from each decade, and decided to read the 50s first, with Keith Waterhouse’s Billy Liar (1959). I didn’t have high expectations, believing it to be similar to Lucky Jim (a book I hated, which is also in the Decades series, making a trio of discontented young men with William Cooper’s Scenes from Provincial Life), but I was pleasantly surprised. It takes us into the mind of Billy Fisher, a teenager living with his family in the Yorkshire town of Stradhoughton, working for a funeral director, and hating his lot.  “You know, dark satanic mills I can put up with, but when it comes to dark satanic power stations, dark satanic housing estates, and dark satanic coffee bars…”  To alleviate his boredom he fantasises a lot, creating a make-believe country where he is leader: the opening line of the book is “Lying in bed, I abandoned the facts again and was back in Ambrosia…”

But his inability to stick to the facts has its downside.  As well as his “number 1 thinking”, where he imagines his family and friends to be everything he wants them to be, he gets caught in loops of “number 2 thinking”, ruminating hypochondriacally about sinister and life-threatening ailments.  More seriously, it has allowed him to ‘court’ three girls at once, each of whom believes herself to be engaged to Billy, though his returned feelings for them depend more or less on how far they are willing to go.  (“The unfastening of Liz’s blouse had become a more or less routine affair and it was done in a detached way, rather as if I were helping her off with her coat.”)  It’s just as well, then, that Billy has a plan to get out of Stradhoughton and his dead-end job: he’s going off to London to work as a scriptwriter for comedian Danny Boon – but it seems to be taking him a long time to get around to leaving…

Billy Liar is lively, funny and short – so what more could we ask for?  Waterhouse manages to keep his central character fairly sympathetic despite his increasing ledger of peccadilloes, and there is an emotional heft to the last chapter, when Billy finally acknowledges that “I did not believe what I was telling myself”.  I was surprised – thinking, I suppose, that the 50s meant the 60s had not arrived yet – by the often frank references to sexual matters.  (Blake Morrison, in his introduction, says that the stage version of the book was booed for use of the word ‘bloody’.)  There’s something comforting about the unthreatening world which the book inhabits, even if it’s as unambitious in literary terms as Billy feels his surroundings to be.  Indeed, like Stradhoughton for him, Billy Liar is the sort of place that is nice to visit once in a while, even if you wouldn’t want to live there.