The last book I read before I began this blog, over the Christmas holidays 2006, was Cormac McCarthy’s festive The Road. I had some quibbles with it, but it’s one of those books which, partly through the distance of memory and partly through the ubiquity it has attained since then, seems almost unassailable, a cornerstone of the modern canon. But my previous efforts with McCarthy – All the Pretty Horses, Blood Meridian – had been abortive struggles. So, inspired by blog reviews and the handsome reissues by Picador in the UK, I tackled one of McCarthy’s earlier novels (and his shortest). 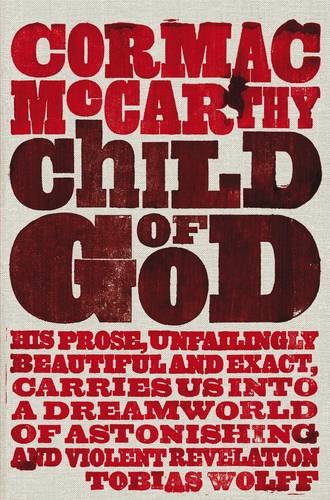 I was warned in advance that Child of God (1973) was a “rough” and “extremely nasty” book. These red flags overprepared me for what turned out to be unsettling but not all that distressing: there is violence, but it is brief and unexceptional; the most disturbing injury is a bird losing its legs. Still, the book is about an Ed Gein-type serial killer, so the bar was set high.

Lester Ballard is a freak, and if he wasn’t such a loner he’d be in good company. The people around him in East Tennessee are not much less eccentric than he is, like the dumpkeeper’s daughter who indulges him in what passes round those parts for flirtation:

What say, jellybean, she said.

What you laughin at?

What you lookin at?

Why, he’s looking at them there nice titties for one thing, said the man on the drum.

You want to see em.

He stood there grinning.

How much you got?

Well go borry two and a half cents and you can see one of em.

Then again, Lester’s peculiarities seem to go a little further than most. “They say he was never right after his daddy killed hisself.” His confused flirtations with another woman go too far, or are misinterpreted, and he ends up with jail time for attempted rape. “What you in for,” he asks his cellmate, who replies, “I cut a motherfucker’s head off with a pocketknife.”

The book has an atmosphere of portent, though the threat seems often to be in the reader’s mind, as Ballard fails again and again to live up to our worst fears. Still, he gets there in the end. “Mr Ballard. You are either going to have to find some other way to live or some other place in the world to do it in.” McCarthy makes no excuses and offers no explanations, but on two occasions the narrator does directly address the reader. Right at the start of the book, in the second paragraph, Ballard is described as having “Saxon and Celtic bloods. A child of god much like yourself perhaps.” The message is – what? – that god or nature creates monsters; or perhaps that violence to McCarthy is a force in itself, delivered through unknowing vessels like Ballard. Later, the narrator observes that “some halt in the way of things seems to work here. See him. You could say that he’s sustained by his fellow men, like you. Has peopled the shore with them calling to him. A race that gives suck to the maimed and the crazed, that wants their wrong blood in its history and will have it.”

Ballard does seem maimed, his actions desperate rather than malicious. The reader can have a curious sympathy, or at least pity, for him. McCarthy’s prose leaves things open, and only rarely goes off the scale, encrusted with ornament:

Alone in the empty shell of a house the squatter watched through the moteblown glass a rimshard of bone-colored moon come cradling up over the black balsams on the ridge, ink trees a facile hand had sketched against the paler dark of winter heavens.

Most of all, Child of God, with all its dark disgust and beautiful violence, is a pleasure entire. McCarthy’s singular vision was intact – fully formed – even in his early work, and this slim starter was the taster I needed to convince me that I need to read all his others too. A difficult decision, but one which I will delight in agonising over.