I first heard about this book on the Man Booker Prize forum, where some speculated that this – reportedly an expensive acquisition for its UK publishers Picador, and destined to be much-hyped – could be in with a shot of the prize. As I write, it’s been longlisted (though we’re told it was called in by the judges, not submitted by the publisher: so not quite so hyped then). The news is a triumph for Donoghue, an Irish-born writer living in Canada, who had cult success with a couple of early books in the UK (notably Hood and Slammerkin), but didn’t have the two novels which preceded Room published here – yet. 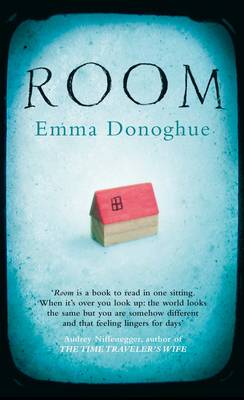 Room has an intriguing premise: it’s narrated by a five-year-old boy who lives in a room twelve feet square and doesn’t know the outside world exists. This immediately set my reading glands salivating: I imagined an allegorical, philosophical novel, a European-style confection that provided an analysis of all our lives by an extrapolation to the extreme, something like Ishiguro’s Never Let Me Go. So my disappointment with Room is partly unreasonable, denouncing it for not being a different book entirely.

Donoghue’s book, contrary to my expectations, is grounded in reality: not only a recognisable time and place (the USA, around now, with cultural references aplenty, from Lady Gaga to Facebook), but with clear inspiration from news stories in recent years of long abductions, in particular the Fritzl case. The boy, Jack, lives with his ‘Ma’ in the room, and he was born there: in other words, Jack is the product of Ma’s rape by her abductor, known to mother and son as ‘Old Nick’. That is not a spoiler, though there are developments in the book that I don’t want to reveal, so I’ll be pretty vague from here on. Nonetheless it’s clear that Room aims at the heart rather than the head, and for many people the emotional heft of the story will be enough to recommend it.

A child’s narrative is always tricky to pull off. Jack’s is readable but a bit too cute (“Ma leans out of Bed to switch on Lamp, he makes everything light up whoosh”), and as usual with such stories, the author’s great task is to give the reader enough information to read between the lines without having the narrator go into an unnatural amount of detail. This is handled pretty well, but like Cormac McCarthy’s The Road – another tale of parent and child in extremis – there’s a sort of sentimentality which is all the more overbearing for being notionally concealed by the naive voice. The reader has to find the emotional tug between the lines, but because it’s there on every page, it’s impossible not to, and the reader feels falsely flattered as a result.

Room certainly has strengths. It is a quick read, and at times gripping and urgent (particularly in part three, which comes immediately before a significant plot development), though this has the unfortunate effect of making the parts before and after seem dull and overstretched at times. And the strong conceit of the book enables the reader to consider some interesting contrasts and paradoxes: how absolute innocence can coexist with absolute – for want of a better word – wickedness; how the ordeal led Ma to give birth to Jack, who is the one thing that now helps her through it. There are moments of conflict that stand out, such as when Jack objects to his birthday cake (he has just turned five when the book begins):

Then it’s time for the candles but there aren’t any.

She puffs her breath. ‘I should have explained better. That’s what the five chocolates say, they say you’re five.’

‘I don’t want this cake.’ I hate it when Ma waits all quiet. ‘Stinky cake.’

‘You should have asked for candles for Sundaytreat.’

However I have to admit that the most common feeling I experienced when reading Room was boredom. While it is essential for Donoghue to relate Jack’s experiences in sufficient detail to give the narrative authenticity (so it looks as though it’s coming from him in real time, and not being told to explain things to the reader), it turns out that a little of this actually goes quite a long way. And although I relished the opportunity to make my own interpretation of Ma’s trauma through Jack’s limited insight, this underplaying means that there are not many points in the book where the reader feels that real peril is at hand. It dwindles almost to nothing in the second half. In the end, although Room manages not to be ghoulish or exploitative about the real cases which were (according to the acknowledgements) its inspiration, it also fails to capitalise on the wonderful fictional opportunities that such a set-up promises.