Before The Finkler Question, I was wondering how much longer I could claim to be a fan of Howard Jacobson’s novels. I’ve read most of them, but with greater attention to his recent ones, from No More Mister Nice Guy (published 1998, and a comic masterpiece) on. I loved The Mighty Walzer (1999) and Who’s Sorry Now? (2002), and while The Making of Henry (2004) had its longueurs, the vim of the opening sections drove me through it with a kind of mad momentum. However, it was with his biggest and most-praised novel, Kalooki Nights (2006), that I finally came unstuck and couldn’t finish the thing. The same with his next, The Act of Love (2008). Frankly, if his new novel hadn’t been longlisted for the Booker Prize, I probably would have avoided it rather than face frustration and disappointment once more. 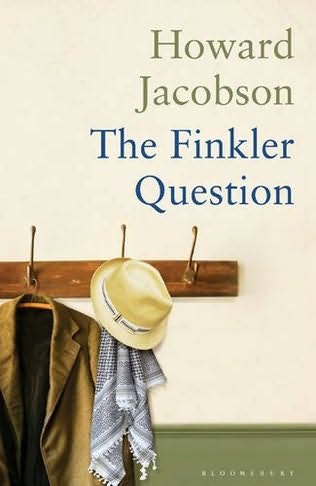 The Finkler Question, luckily, is a triumph. It is a novel which rounds up its themes and runs them to ground exhaustively (and sometimes exhaustingly). One of those themes is one which will not surprise any admirers of Jacobson. When he published Kalooki Nights, he described it as “the most Jewish novel that has ever been written about anyone, anywhere.” He should have added, “except for the one I’m going to write in a few years’ time.” This needn’t put readers off; after all, some of the finest American writers of the last century – Bellow, Malamud, Roth – restlessly interrogated their own Jewishness. Jacobson does not shirk the challenge.

His central character, Julian Treslove, is not Jewish. He worked for Radio 3 (having “found himself with a degree so unspecific that all he could do with it was accept a graduate traineeship at the BBC”) and, having become disillusioned (“‘Would anyone notice if my programmes weren’t aired?’ he wrote in his letter of resignation. … He received no reply”), now works as a celebrity double. He keeps being mistaken, however, for Jewish stars, and when he is mugged one night in the street, becomes convinced that he – a Gentile – has become the victim of an anti-Semitic attack. It’s just as well, then, that Julian has two Jewish friends with whom he can chew it all over. Sam Finkler, Julian’s middle-aged contemporary, is a philosopher of the de Botton school,

making programmes to show how Schopenhauer could help people with their love lives, Hegel with their holiday arrangements, Wittgenstein with memorising pin numbers.

The other Jewish friend, Libor Sevcik, taught Julian and Sam at school, and so is a generation ahead. Both he and Sam are recently widowed, leading Julian to wonder how “you go on living knowing that you will never again – not ever, ever – see the person you have loved?”

He wanted to ask Libor that. ‘How did you get through the first night of being alone, Libor? Did you sleep? Have you slept since? Or is sleep all that’s left to you?’

Libor, in his ninety-first year, re-enters the dating game, forgetting his etiquette, risking offence to a flat-chested young woman with the “mercantile gesture” of eyeing up her breasts. “The things you had to remember with a woman you hadn’t been married to for half a century! The feelings you had to take into account!” In the end he concludes that “I could use the company but I can’t go through the pain of getting it.”

This “proof [that] everything exacted its price in the end, and perhaps happiness exacted it even more cruelly than its opposite” is all the more powerful to Julian because he seems never likely to experience it himself. He has two sons he barely knows to two women he rarely sees. He envies Libor’s long, uxorious marriage, but not enough to want to have one himself. He struggles to form a relationship with his sons. “He didn’t have much of a grasp on family life but he guessed that a son doesn’t want to hear that about his father.”

These themes of loss and longing are not deadening or dull: everything here is presented with spark and vigour, giving (I can’t improve on this critic’s comment on The Mighty Walzer, so I’ll just repeat it) “a pleasure akin to humour even when it’s not actually being funny.” And most of the time, it is actually being funny, and not just in one-liners (“At a certain age men began to shrink, and yet it was precisely at that age that their trousers became too short for them. Explain that”). Jacobson’s comedy is something that is internal to his writing and impossible to extract while giving full justice: the effect is cumulative. The corollary of this is that if you don’t find it funny to begin with, you’re unlikely to be persuaded through persistence. There’s no gainsaying laughter, or its absence. But Jacobson’s nimble footwork, supple manipulations and layering of character and observation had me drumming my heels with deep satisfaction literally from the first page.

This enhances the feeling when the comedy shrinks back, and leaves us with thoughts like this on Libor’s loss of love after half a century of happy marriage, the riposte to claims of having had ‘a good innings’:

At any age there is future one doesn’t have. Never enough life when you are happy, that was the thing. Never so much bliss that you can’t take a little more.

In all this, I have said nothing of what I suggested above was a central subject of The Finkler Question: Jewishness, and what drives affection for and resentment of Jews, and how Jewish people in Britain today feel about Israel. Jacobson, in his sub-Bellovian way (discursive, digressive, thoughtful, but always pulling back with a joke, such as the scenes of a regretful Jew who keeps a blog recording his attempts to regrow a foreskin), pummels the subject into submission with Julian, Sam and Libor’s exchanges. “You had to be born and brought up a Jew to see the hand of Jews in everything. That or be born and brought up a Nazi.”

However for me, all these “emotional improvisations with a bracing undernote of intellectuality” are a stimulating sideshow to the main event, which is a bitterly funny and thrillingly heartbreaking story of friendship, love and loss. Near the end of the book, Libor reflects on what his wife experienced as she was terminally ill, the terror of waking up every morning to the knowledge of impending death afresh: “The morning was always waiting for her. No matter where they had got to the night before, no matter what quiet almost bearable illusion of living with her dying he believed her to have attained, the morning always dashed it. […] Nothing was ever settled. Nothing ever sealed. The day began again as though the horror had that very moment been borne in on her for the first time. And on him.”

The Finkler Question is the best sort of comedy: that which is not just adjacent to tragedy but fully steeped in it. If there’s one thing better than being funny, it’s being funny and sad at the same time. Of course, Jacobson says it better than I can: “[He] couldn’t keep up with the fluctuations of her feelings. She wasn’t, he realised, going from fear to amusement and back again, she was experiencing both emotions simultaneously. It wasn’t even a matter of reconciling opposites because they were not opposites for her. Each partook of the other.”