When I rule the world, the list of authors everyone must read (yes, you’d better start taking notes) will include Keith Ridgway. I’ve read three of his five books; I am rationing them. But you don’t need to buy them from £0.01 on Amazon Marketplace to see how well he writes. His blog posts show it: try him on old Nazis, on honey cake, on rent boys and Metropole, on The Kindly Ones, on Alone in Berlin (covering the last much better than I did). Yet at the time of writing, all his books have Amazon sales ranks – that handily specious guide to success – pushing the one million mark. It’s a world gone wrong. 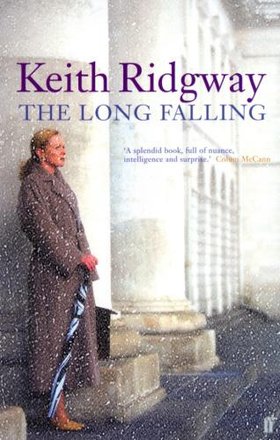 The Long Falling (1998) was Ridgway’s first novel – after the novella Horses – and won two literary prizes in France, which shows that they have better taste than we do. If Horses was John McGahern with – forgive me – attitude, then The Long Falling, with its depiction among other things of contemporary gay Ireland, must be Colm Tóibín: the Director’s Cut. In fact, the gay interest and the political currents are secondary to a strong portrayal of a woman in crisis, worthy of my old friend Brian Moore. (And that is the last time I will liken him to another writer; Ridgway is gifted enough to be a point of comparison himself.)

Grace Quinn has lost both her sons. Sean died as an infant when a moment’s inattention allowed him to crawl into a ditch and drown; her other son, Martin, left home in the Cavan town of Cootehill after telling his parents who he really is, and getting the expected response from his father (‘I mean that I’m gay.’ ‘Queer?’ ‘Gay.’ ‘There’s no such word. Not that way. It’s queer.’ Then: ‘Your mother killed the wrong fucking one, that’s for sure’). Martin goes to Dublin. Grace is left alone, with a violent husband (what is it about the Irish? Great writers and bastards for dads. Is there some link?) and little sympathy from the locals.

“What had happened” is that Grace’s husband knocked down a girl with his car and killed her. “Grace could not afford to fix the front of the car. She drove it as it was, reminding everybody. People did not like her for that.” Two deaths, one estrangement, domestic violence (“He would punch, and he would throw me. He could pick me up and throw me”): enough tragedy, right? Wrong: this is literary Ireland. Room for a little more. So Grace hits her crisis, runs into it with her eyes open, and moves to Dublin to stay with Martin.

Imagine falling from a great height. Without panic. Imagine taking in the view on the way down, as your body tumbles gently in the air, the only sound being the sound of your progress. Your progress. Imagine that it is progress to fall from a great height. A thing worth doing. Though it is not a thing for doing. You do nothing, you simply allow it to happen. Imagine relaxing into the sudden ground. Imagine the stop.

We don’t have to imagine it, as Ridgway has done that for us, and gives us Grace’s long falling, her time of “trying not to break open”, in perfect detail, told from different points of view. One reviewer calls it “the Irish Crime and Punishment.”

She is thrown into the life of the city, where the Celtic tiger (remember that?) is just beginning to drag 1990s Ireland into the modern world. Her son takes her to a gay bar (while he visits a bath house alone: “They were all ages, walking to and fro, naked but for their towels, some carrying keys, some cigarette boxes, all with the same look. Just eyes. They looked like men given some terrible task. They wanted it over with”). But Ireland has been backward too long to crawl forward without a fight. There are beggars and drunks all over the place. Everyone in Martin’s liberal, secular circle is getting agitated about the ‘X case’, where the Irish Attorney General obtained an injunction to stop a 14-year-old rape victim from travelling abroad to get an abortion. The case provides a political backdrop for modern Ireland’s birthing pains.

Meanwhile, Martin is fretting about his lover, Henry, and what he might be up to in Paris, even as he struggles to come to terms with his identity in a country still emerging from under the dead hand of religion. “The circumstances of his life had flowed from the way he wished to make love. From that clumsy declaration. I am what I want. I am this.”

The plot in The Long Falling slows down at times and takes tricky turns elsewhere, but by the end the feeling is of an inevitability playing out. It seems like a story you don’t so much read as watch. (Aptly enough, it’s being made into a film. Well: a French film.) The brilliant details and sharp dialogue don’t disguise the tragedy at the heart of the book. The past is not dead: it is not even past. We discover that Grace’s falling began long ago, when she met her future husband, and in the grand tradition ignored her parents’ advice (“Don’t go to Ireland. Do not go to Ireland”). Late in the book, Martin is interviewed by a policeman, who tells him, “You’re going to have to start from the beginning, Mr Quinn, if you don’t mind. I’m not sure I follow you.” “From where?” says Martin.

Leave a Reply to John Self Cancel reply