One of the hidden gems on this blog is J.R. Ackerley’s only novel We Think the World of You. So when I was disappointed by the next book of his I read, Hindoo Holiday, I decided my next visit had to be to the book I understood to be broadly the source material for the novel. (Ackerley’s method of acquisition of his dog – from a lover about to go to prison – is the same as in the novel.) 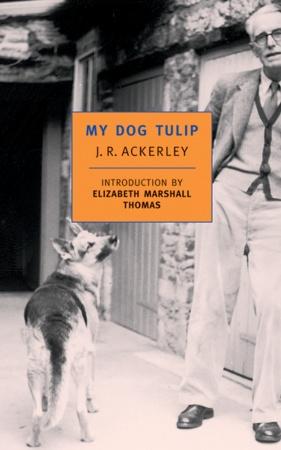 My Dog Tulip (1956) is presented as non-fiction but for the dog’s name: Ackerley’s dog was named Queenie (the name was changed for fear of causing mirth about the author’s sexuality). The connection with We Think the World of You is clear: the narrator of the novel is indistinguishable from Ackerley here, his strongest identifying traits being love of his pooch and disdain for the working classes.

To describe this book as a love letter to a dog is both accurate and inadequate. Ackerley described the fifteen years he spent with Queenie as his happiest, and when he finally had her put down in 1961, he lost much interest in life. Money brought in from winning the WHSmith Literary Award (for We Think the World of You) and the sale of letters E.M. Forster had sent him did nothing to alleviate his depression; indeed, he viewed the proceeds from the latter as “a sum of money which will enable [his sister] Nancy and me to drink ourselves carelessly into our graves.” This he more or less proceeded to do, dying in 1967.

However in the book there is no reference to this later darkess; My Dog Tulip was published during Queenie’s long life, and only an appendix from (I think) 1965 makes indirect reference to her death. (“She lived to the great age of sixteen-and-a-half.”) The book is composed of equal parts Ackerley’s almost pathological devotion to Queenie (hereafter ‘Tulip’, dammit) – and hers to him – and his frustration at the difficulties presented by daily life with her. One of these is Tulip’s untrammelled devotion to Ackerley, which makes it almost impossible for vets to treat her. Until one of them points out to Ackerley what might have been clear to him all along, had he not been hindered by his own love: “Tulip’s a good girl, I saw that at once. You’re the trouble.”

“Well, she’s in love with you, that’s obvious. And so life’s full of worries for her. She has to protect you to begin with; that’s why she’s upset when people approach you: I expect she’s a bit jealous, too. But in order to protect you she’s naturally got to be free; that’s why she doesn’t like other people touching her; she’s afraid, you see, that they may take hold of her and deprive her of her freedom to guard you. That’s all the fuss is about, I should say. It’s you she’s thinking of. But when you’re not there, there’s nothing for her to do, of course, and no anxiety. Anyone can handle her then, I’m sure. That’s all. Dogs aren’t difficult to understand. One has to put oneself in their position.”

Ackerley never seems entirely keen on putting himself in Tulip’s position, preferring to revel in his own trials with her, though not unsympathetically. We get a good deal on Tulip’s waste (a whole chapter on it, titled “Liquids and Solids”), and the way Ackerley describes his dog’s posture when defecating may give an insight into the level of detail he is prepared to go into: “Her long tail, usually carried aloft in a curve, stretches rigidly out parallel with the ground; her ears lie back, her head cranes forward, and a mild, meditative look settles on her face.” (An aside: did Ackerley really write “sidewalk” when describing where Tulip does her business? This repeated Americanism in the NYRB edition trips up the British reader.) The half-century vintage of the book shows in passages where Ackerley wonders, rhetorically and even incredulously, how on earth people expect him to prevent his dog from fouling the pavement – the standard practice of post-shit bagging evidently being some decades off. This chapter contains some lovely sensitivity born from potential slapstick, as Ackerley stays with friends and Tulip soils their carpets, leading to agonies of guilt for our man, not because of what Tulip did (she was never invited back) but because she had tried to warn him that she needed to go outside, and “I had failed to take her meaning, and nothing I could ever do could put that right.” 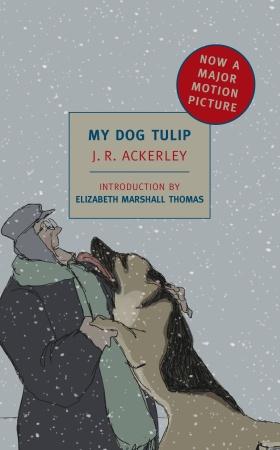 But this attention to what comes out of Tulip is as nothing compared to Ackerley’s detail in, well, what goes into her, as he attempts to have her mate with a fellow Alsatian of suitable pedigree. (“Although I had no profit-making motive in the matter, so beautiful a creature as Tulip should certainly have children as pretty as herself.”) Here is where even my high appetite for elegant self-enquiring sentences by a man who would be struck dumb if deprived of the semicolon, began to fade. It’s not so much the intimate elements (“Miss Canvey, I’m awfully sorry to bother you again, but where exactly is the vagina?”) as the sheer length of the subject: almost a third of the 200-page book.

Happily, the last chapter, “The Turn of the Screw” ends the book on its highest note, the same elegiac tone which made We Think the World of You so haunting. Ackerley addresses Tulip’s ageing and her closing seasons of fertility (“It is spring, it is winter, it is summer…”), reflecting on how he can “give her everything she wants, except the thing she needs.” (Inevitably, a certain question arises in the reader’s mind about Ackerley’s closeness to Tulip. That tricky subject is discussed, along with much else, in Joan Acocella’s superb profile of Ackerley in the New Yorker, from which I took many of the biographical details above, and which I recommend without hesitation to all, whether familiar with Ackerley or new to him.) Finally My Dog Tulip seems less an individual book than part of something larger, the recreation of his life which Ackerley undertook in his four published works. He comes across as a man difficult to deal with, unclubbable, snobbish, but penetrating and self-revealing. His capability for love, expressed almost exclusively through his “beautiful bitch”, is all the more affecting for the narrow circumstances in which it flourishes, rejecting people as it embraces Tulip. As she enters her final years, Ackerley is walking with her in the woods when he spots shards of a broken bottle, which could damage her paws.