Georges Perec is perhaps best known for his novel A Void (La Disparition); under EU regulations, all reviews of that book must be, and include the word, lipogrammatic. However before now, my only experiences of him were Life: A User’s Manual, and The Winter’s Journey, two stories at extremes of length but equally satisfying. Now, Vintage Classics gives us his other fictions; this volume published alongside Things / A Man Asleep, of which one Amazon reader says, “Everyone I know who has read this book has been stricken with near-clinical depression!” (Five stars.) 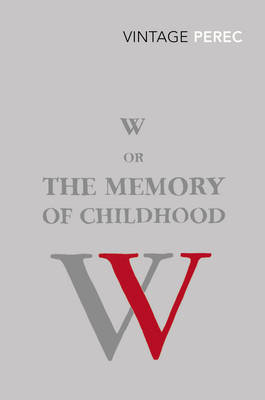 W or The Memory of Childhood (1975; tr. 1988 by David Bellos) has an immediate problem in its translation: the French rendition of the letter is not ‘double-u’ but ‘double-v’, which carries much more weight, both allegorical and punning (double-vie or double life for example). This necessitates a foreword by the translator, and makes the reader feel less bad about missing other subtleties. Even so, it is clear that Perec is one of those writers with whom the book you have just read seems to be his masterpiece; which drives you off to read the others; and so on.

The double life in W is stated in the title: it is not an alternative title, but one which brings together the two stories that are riffled together like hands of cards. W describes one story: a voyage to the fictional island of W, where the rules of sport hold sway. The Memory of Childhood is the other: a seemingly straightforward memoir by Perec where artefacts and documents help him recreate the past he cannot reach (“I have no childhood memories”). Why, then, is it W or The Memory of Childhood and not W and The Memory of Childhood? Because each story feeds into the other, helps form it but is also formed by it. The merging is complete when in the memoir sections, Perec tells us that “when I was thirteen I made up a story … [It] was called W and it was, in a way, if not the story of my childhood, then at least a story of my childhood.”

It is impossible to write about memory without acknowledging that the gaps are as important as the details. The memoir sections are not just given verisimilitude by the objects and papers Perec refers to, but are wholly created by reliance on them. The results are peppered with self-aware footnotes (“I do not know the source of this memory, which nothing has ever confirmed”). A similar act of establishing foundations can be seen in the W chapters, which open with an outlandish framing device, of a man named Gaspard Winckler going on a quest to find a missing boy whose name he was given. He becomes distracted, however, when he discovers the island of W, and the remaining W chapters describe its sporting life, with the level of detail adding realism just as the bizarre conceit takes it away.

On W, “sport rules”, and emblazoned on the gates of each village is ‘Fortius Altius Citius’, a slight rearrangement of the Olympic motto. Here, “the notion of sin is … fully integrated into a sports morality.” However, far from being an idyll of fairness and meritocracy, W is a place of the greatest horror. The clues begin early on (“quite inexplicably, perhaps for reasons of physique, pole-vaulting is not, or is no longer, contested”) and build. There is no attempt to keep the truth of W a secret from the reader – it is too entwined with Perec’s memory of childhood for that – and yet as the details accumulate, the reader is continually surprised. The fantastic telling is interrupted by blunt bullets of information, as though merged from elsewhere, until eventually the penultimate page of the W narrative makes the skin prickle. On one level, what this describes is simply the tyranny of sport – “the survival of the fittest is the law of this land” – where equality is not just absent but abhorrent. It does not take much of a sympathetic leap to see how this extends not just to one phase of time in one continent, but to all humanity throughout history. Meanwhile, the memoir is particular and specific, but as well as being a family story it is “a history … for me and for all my people.”

W or The Memory of Childhood is not two books in one, but three. There is the diversion of the surface story. There is the weaving of history into it. And there are the deepest truths which are “bound up with the matter of writing and the written matter, with the task of writing as well as the task of remembering.” Remembering is a task because it is painful, not just for the child of European Jews in the 1930s, but for any child of its parents. There are things that we, or others, would prefer to forget. If, per Salter, “the only things that are important in life are the things you remember,” what does that imply for Perec? With W or The Memory of Childhood, he has created extravagant, mundane, inseparable fictions which are bursting with truth.

I write: I write because we lived together, because I was one amongst them, a shadow amongst their shadows, a body close to their bodies. I write because they left in me their indelible mark, whose trace is writing. Their memory is dead in writing; writing is the memory of their death and the assertion of my life.