A discussion on Twitter recently about Irish writers uncovered the name John Broderick, new to me. The person who suggested him described Broderick’s books as “elegiac, character-driven, complex in ideas. A minor novelist (to be tough-minded) but interesting.” I thought I’d find out for myself. 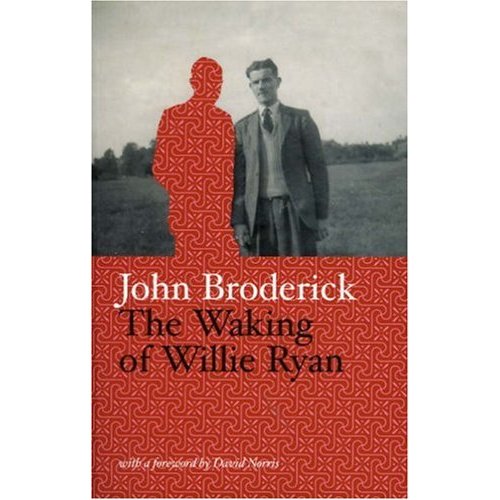 The Waking of Willie Ryan (1965, reissued in the above handsome edition in 2004 by Lilliput Press) was Broderick’s fourth novel. His first had been banned by the Irish Censorship Board – a recommendation to the modern reader in itself, if only for reasons of cultural curiosity. From the subject matter of Willie Ryan – homosexuality and the hypocrisy of the Catholic Church dominating the mix – it’s easy to see why he was trouble to the authorities.

Broderick is an efficient writer in one sense: he wastes no time getting us into the heart of the story. In the opening scene, a woman whose car journey is interrupted by a hen crossing her path (no deviation from certain clichés of rural Ireland here), spots a man at the gates to one of the village houses. In the next chapter we learn who it is: “Your brother Willie, Mr Ryan. He’s come home, out of the asylum.” One could hardly wish for more intriguing first pages. (Twenty years later, Iain Banks would refine that down to the opening line of The Wasp Factory: “I was making the rounds of the Sacrifice Poles the day we heard my brother had escaped.”)

Willie’s brother and his wife consider themselves to be central to the community, an unnamed village in “the middle of the great central plain of Ireland.” In common with many such pillars, their main interest is in maintaining the status quo and their own position. “He must be sent back at once. If we act quickly it may be possible to get the whole thing over with quietly.” Unfortunately for them, it seems that the doctors at the asylum were happy to let Willie out as soon as there was anyone to take him. Willie left voluntarily, convinced that death is near, and walked the forty miles from the asylum, where he lived for 25 years, to return ‘home’.

This sets up some nice, if broadly painted, conflict between the Ryans and their son Chris. He is a free-thinker, engaged to a girl whom his parents consider to be beneath him when he could do better. “Look at Susan Carroll, two pubs and a hotel, and a nice refined girl into the bargain.” He takes Willie in when nobody else will, and represents a younger generation, one which Broderick must have hoped would be agents of change in these backward backwaters. The cast is filled out with Nurse Halloran from the asylum, sympathetic to Willie, and Father Mannix, naturally the villain of the piece, with his comical reactionary sentiments (“‘Is that English coal?’ he asked suddenly”). In a country where reactionary is the norm, this is bad news for someone like Willie, who just wanted “to live his own life,” but whose deviation from society’s expectations dooms him. The plot is strong and builds to a prolonged confrontation between Willie and Father Mannix.

There is a particular quirk to Broderick’s writing which almost stopped me from continuing with the book. The story proceeds mostly by dialogue, either filling the reader in on events or moving the story on with decisions made in conversations. However Broderick has a maddening practice of adding largely superfluous activities between the lines of dialogue. No character ever says something without doing something at the same time. Here is an entirely typical snapshot of one page. This is interesting because it ties in with something Tobias Wolff once said about such details.

There’s a kind of stock repertoire that comes out of drama, mainly of gestures and actions that people perform in stories. You know: the mixing-of-drinks, the-crossing-of-rooms, the-lighting-of-cigarettes. What’s wrong with them is they’re essentially anonymous. They don’t tell us that much. What you want is a gesture that tells you something particular.

This is so right of Broderick that he may as well have been speaking about him. It seems to suggest a lack of confidence by the author in the power of the words themselves, which is misplaced, because the dialogue is strong (if often too black and white). The benefit is that the reader can skip half the text in pages like these. Another unwelcome feature is Broderick’s decision to portray Willie as being physically girlish and unmasculine – his “small white hand, supple and beautifully shaped,” his “lithe and graceful step,” his “thin white foot, arched forward like a dancer.” These descriptions seem unhelpfully to conform to gay stereotypes even as the book seeks to take them on.

The strengths of The Waking of Willie Ryan are in the boldness of the subject matter – were many Irish writers as scathing about their own society half a century ago? – and the loving detail of the secondary characters, such as Miss Pinkie White (“Mountains falling and dunghills rising, that’s what I say,” is her assessment of the progress of Irish society). David Norris, in his introduction to this edition, describes John Broderick as “an awkward customer in the literary Ireland of the 1960s.” Although a minor novelist (an assessment I’d now agree with), it’s this awkwardness which make his books still worth reading and his name worth remembering.