Lars Iyer’s debut novel comes from the admirable Melville House, home of Lee Rourke’s The Canal and Hans Fallada and the Art of the Novella series. It also features high praise on the back cover from Rourke and Steve Mitchelmore, a reliable source of recommendations. 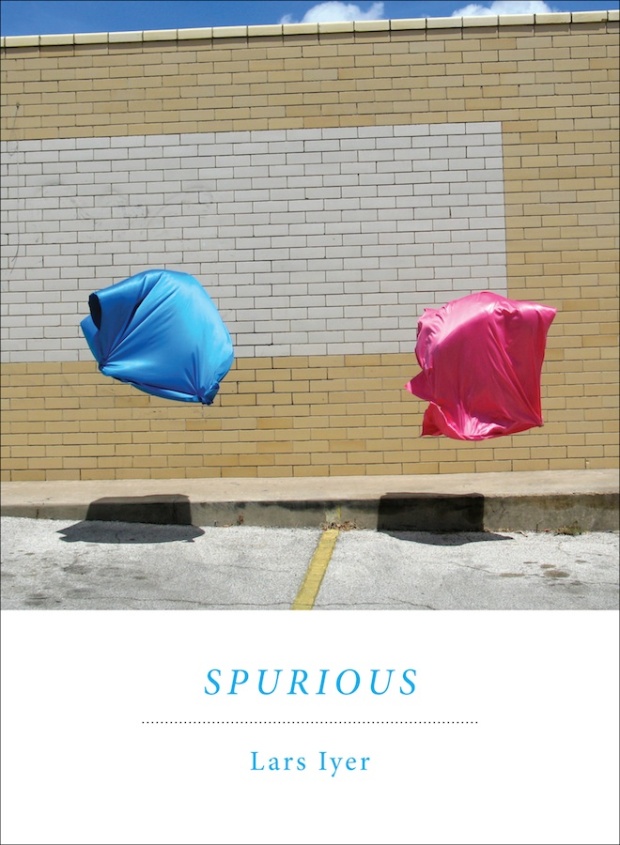 Spurious began life as a blog, and its genesis shows: the chapters are short, like blogposts, and the consistency of voice and repetition of themes both emphasises and distracts the reader from the fact that there is not much directional plot. There is a little bit of plot, about damp growing in the narrator’s home (“The greatest experts on damp are completely baffled”), but a real plot would be unwelcome here. It would have driven me on and prevented me from stopping on almost every page to smile, think, or sense a cartoon lightbulb of understanding begin to glow above my head before popping out just as I concentrated on it. (With a plot, the lightbulb would never even have got going.) Instead, it has a spiral narrative – a Spirograph narrative! – turning on itself so you can see the same things passing over and over, a little closer or further away, from a different angle or level of familiarity.

Spurious is full of paradox. It’s about everything and nothing. It’s a funny book which uses exclamation marks (I know!). It provokes thought while evading easy understanding. Its characters speak simply about knotty concepts. The characters are the narrator, Lars, and his friend W. Most of what Lars tells us is reporting what W. says to him: we know more of what W. thinks than of what Lars does. W. speaks his mind (and Lars speaks W.’s mind too): “‘When did you know,’ W. says with great insistence. ‘When did you know you weren’t going to amount to anything?'” He is relentlessly critical of Lars. “It’s my fault, W. says. Everything went wrong when he met me.” But the lightness of touch, the artfulness in the repetition, means that it sounds not like bullying but an exaggerated, hyperreal version of banter between friends.

The conversations are short but feel like excerpts from one never-ending exchange, like arcs cut from a circle. Subjects and people recur: Béla Tarr, Maurice Blanchot, Franz Rosenzweig. Not mentioned, but all over the book, are Thomas Bernhard and Samuel Beckett. The narrative container of Lars reporting W.’s thoughts is pure Old Masters, and Vladimir and Estragon could not be more simultaneously comic and tragic. “These are the end times, but who knows it but us?” Lars asks. Still, cheer up:

W. and I never think about our deaths or anything like that. That would be pure melodrama. Besides, if we died, others would come along to replace us. Our position is structural, we’ve always been convinced of that. We’re only signs or syndromes of some great collapse, and our deaths will be no more significant than those of summer flies in empty rooms.

Also appearing through the book is Kafka. “Our lives each took a wrong turn when we opened The Castle. It was quite fatal: there was literature itself! We were finished.” Lars and W. define themselves by what they will never live up to. W. hopes that his regular bouts of ill-health will give him the genius of a Kafka. “But W.’s illnesses lead nowhere, he says. They always disappoint him.” Ultimately Lars and W. recognise that neither of them is Kafka, they are both Max Brod, whom they revere for rescuing Kafka’s works, and revile for his “stupid” commentaries on Kafka’s works. (Brod, like Lars and W., was no Kafka.) “‘But we’re essentially joyful,’ says W., ‘that’s what will save us.'” And they are: what Lars and W. represent is an endless intellectual curiosity, on everything from messianism to Peter Andre (though the pop cultural references for me were the least funny part of the book). Such interest in things can only ever be bright-eyed and vigorous, and funny even when it’s horrible. “‘Go on, tell me,’ says W., getting excited. ‘How fat are you now?'”

Lars and W. travel in the book, mostly from the south-west of England where W. lives to the north-east, Lars’s home. But they may as well stay in the same room, conversing all the time. What W. wants is for every conversation to be “something great, something life-changing.” His fantasy is “a group of friends who could make one another think.” He longs for “the twenty-second century, or the twenty-third, when things might start getting better again.” He wants all conversations “to go from the apocalyptic to the messianic.” He is insufferable, but inseparable from Lars. They are like two aspects of the same character, the warring mind of someone who acknowledges his limitations but nags at himself for accepting them.

How far apart, too, are the author and his characters? So far I have written about Spurious as though there was no author, so effectively does the book have its own life. Iyer has given an interview where he explains the origins of the blog and the novel, though I am trying to forget it as it imposes too much on my own reading. Anyway, when W. has a book published toward the end of Spurious, Lars agrees that “His book is better than him.” Writers suffer illness, get distracted, talk rubbish. Their books endure. Lars fears “the empty time which makes thought possible.” Spurious is fully attuned to our times, where thought is impossible because of our inability to stay off Twitter, and with no empty time we never properly think. W. wants friends who can make him think. Too bad: he will just have to make do with books that can be friends, books that make you think and entertain you at the same time, like this one.