I’ve often thought that Julian Barnes is unfairly castigated as a middlebrow muddler of a novelist. (Don’t ask for citations, but it’s definitely a vibe I’ve picked up over the years.) True, he is the author of England, England, one of the worst novels I’ve read, but otherwise, with titles like Flaubert’s Parrot, A History of the World in 10½ Chapters and Talking it Over/Love etc., he shows some appetite for adventure in form. His last novel, Arthur & George, while a pretty straight story, was a credit to the much maligned genre of literary fiction, and earned him the modern book publicity double whammy: a Booker shortlisting and a seat on Richard & Judy’s sofa. After six years and nothing to show but a disappointing memoir on death (Nothing To Be Frightened Of), I wondered if we would ever get more fiction from him. Then, in quick succession, a new collection of stories, and this slim novel. 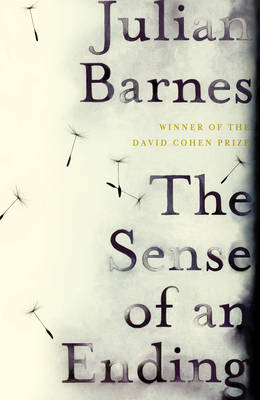 The Sense of an Ending is a memoir on death, again, but a fictional one this time. The title, and the sumptuously funereal appearance of the UK hardback edition, suggest that this is a subject on which Barnes has not yet written himself out. That may be inevitable: Barnes is 65 years old, and his former friend Martin Amis observed that intimations of mortality come so thick that after the age of forty, “it’s a full-time job looking the other way.” There may be another reason, indirectly connected to the former friend too, of which more later.

In the book, Tony Webster is looking back on his life, or one particular arc of it, to do with a gifted schoolfriend, a girl, and an everyday tragedy. Tony is an interesting study: retired, particular, clearly somewhat lonely: “I had wanted life not to bother me too much, and had succeeded – and how pitiful that was.” His only regular human contact is his ex-wife Margaret, with whom he continues to get on well: indeed, she seems to be his only friend. She, with apparent disinterest, offers him advice on what to do when his teenage experience with ex-girlfriend Veronica starts to trouble him again. Why worry now about something that happened forty years ago? Because it involves death, and Tony is not getting any younger. And because the past is never dead; it is not even past.

What this boils down to is a sort of quest for Tony. He wants to read his schoolfriend Adrian’s diary, which involves first tracking down Veronica and then persuading her. As we might expect from Barnes, all this is delivered in an analytical and discursive style; he moves the story on as an essayist works through his arguments. The clever-cleverness of youth gives way to the agnoticism of middle age. There are regrets, recognitions and renegotiations: “I thought of the things that had happened to me over the years, and of how little I had made happen.” What begins as a solvable mystery – how can Tony persuade Veronica to release Adrian’s diary? – turns into “something much larger, something which bore on the whole of my life, on time and memory. And desire.” Tony ends up unsure whether “my life had increased, or merely added to itself,” and there is a thick plottiness to the ending, or endings, which is surprising if not entirely satisfying.

The central character of the book is not Veronica, or Adrian, though their actions are central to it. The story is told by Tony and, as a consequence, is about Tony. He throws doubt on his own reliability (which led me to trust him implicitly), questions his own motives, and does his best to honour Adrian’s complaint from decades ago (which I suspect also reflects Barnes’s view): “I hate the way the English have of not being serious about being serious. I really hate it.”

Reading The Sense of an Ending, a thought kept coming back to me. With the book’s repeated motif of regrettably rude correspondence – such as Tony’s own toe-curling letter to Adrian and Veronica brought back from the dead – I wondered if it might have been inspired, in part, by Barnes’s well-reported rift with Martin Amis. This arose in January 1995 when Amis left his UK agent, Barnes’s wife Pat Kavanagh, and went all-in with his US agent, Andrew Wylie. In response, Barnes repudiated their friendship in a letter which Amis, in his memoir Experience, described as “blunderingly ugly,” and which ended with the words ‘Fuck off.’ How’s that for, as Tony describes Veronica’s identically worded email to him here, a “two-word, two-finger response”? (Amis tried to revive the friendship a year later, in vain: “It was said that I turned away – and I don’t do that. I won’t be the one to turn away.”) Could it be that Kavanagh’s recent death – the book is dedicated to her – has made Barnes feel how his character feels on reading his vicious old letter? “Remorse, etymologically, is the action of biting again: that’s what the feeling does to you. Imagine the strength of the bite when I reread my words.” Could it be? Perhaps, perhaps not; but it added piquancy to my reading.

Still, what cannot be in doubt is that this is Barnes’s most death-pervaded book since, well, his last one. Death, getting close every day, is always personal. In Frank Kermode’s work of literary criticism from which Barnes takes his title, “the sense of an ending” refers to apocalypticism, the end of the world. Barnes’s concern here is far more serious than that.