This is a book which came to my attention twice. First, like most bloggers I receive requests (especially from small presses) to review books, and the publisher of this book, Eight Cuts Gallery Press, asked if they could send me a copy some time ago. I declined (as I do to most such requests) because I had too many books awaiting attention already (as most of us do). This month, however, the book was shortlisted for the Guardian’s Not the Booker Prize, by public vote. The orgiastic praise for the book on the Guardian review site and Amazon made me curious, and knowing it was short and could be had inexpensively (I paid £2.14 to download it to my iPhone as a Kindle ebook), I decided to have a go. 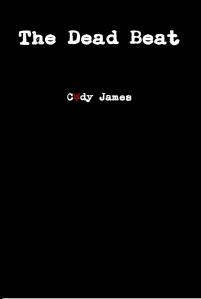 The Dead Beat is set in 1997 in California, and narrated by a young man called Adam. He’s a slacker, a user, a loafer: a deadbeat. He surrounds himself with like minds. They have “shitty jobs.” Their “laundry situation [has] reached critical mass.” You get the idea. James writes from experience: “three of the characters are me, the fourth was a friend of mine, and all the other characters are people I knew and hung out with.” She wrote the book in five days “and then wound up in hospital on the sixth day on an accidental overdose.” Some of Adam’s friends in the book, such as Sean, attain a distinction as characters, others – Xavi, Lincoln – tend to run and blur. Some dialogue – again like Sean’s run-on ramblings – has a ring of truth to it and chimes with the reader. The exchanges are necessarily banal, but they lack the blank poetry of Tao Lin, the satire of Bret Easton Ellis, or the life and zing of Bukowksi or Fante.

There are heartfelt passages in The Dead Beat, as when Adam rails against Lincoln’s demands of their friendship (“I held our situation in my hands, that breaking thing, cutting me”) – it sounds as though James wrote it from life. The empathy with the characters, the balance presented in their shapeless lives, are the book’s greatest strengths. But art is not made from sincerity. And in particular, when you choose to write about a setting as hackneyed as this, there needs to be some transformative power, some alchemy, which I didn’t detect. This is not to say that there’s nothing to see here. There is an amusing passage on how users of different drugs revile one another, and social observation in how workers in low paid jobs “can’t afford to fuck up” with “sick days or mental health days.” “You screw up, you lose your job. It’s simple. Only rich people are allowed to fuck themselves up. They’re the only ones with the room to fall.” There is even a nice splice of satire and characterisation when Adam watches a TV ad for a spurious health drink as he knocks it back. “The ad ended with an incredibly telegenic old man turning to the camera, blue can in hand, and a caption appeared below, which read, ‘Improve the quality of your life.’ I took a sip, thinking, you and me, old buddy.” And James writes well on Adam’s response to art as he looks at a painting while recalling the soundtrack to I Pagliacci.

The weaknesses in James’s writing stand out clearly. She has a maddening habit of using alternatives to “said” (“he concurred,” “he answered”, “he yelled,” “I sighed”) and of adding adverbs to dialogue description (he commented disparagingly). She hammers home significant points – the significance of the Hale-Bopp comet, repeating plus ca change, plus c’est la meme chose several times in a couple of pages (and even translating it), and the same with the phrase “life is beautiful.” This is all first person narrative, so perhaps it’s Adam who is so clunkingly unsubtle, not the author. But there are no other indicators that we should view him at a distance (empathy, as I said, is strong), he’s often articulate, and dullness of mind – or frazzledness of mind – can be portrayed more subtly. The need to over-explain extends to the likes of Adam saying “It reminded me of what my mom used to call ‘nervous laughter’ – laughter at inappropriate moments.” If the book comes from life, then we could compare it in memoiristic terms to John Healy’s The Grass Arena: a book not well-written, but powerful because it brings powerful truth. But The Dead Beat is presented not as a memoir but a work of fiction, a work of creativity and imagination.

How does this all balance out in the end? I don’t regret reading The Dead Beat, but nor do I recommend it. But we are being asked to believe, by Amazon reviewers and those who voted in the Guardian Not the Booker Prize, that this is a masterwork of sorts, and being asked to pay money for it (though the publisher is also offering a free PDF at the time of writing). These claims made for The Dead Beat are the most surprising thing about it. It’s sometimes enjoyable, with some nice moments and some weak ones. But there is nothing remarkable in literary terms. The milieu has been done before, and better, by many writers (as above) and most notably, the brilliant Denis Johnson. There is no deformation of language in The Dead Beat, no structural innovation, no sense of exploration. Next to something like Blake Butler’s There Is No Year (published, incidentally, by a mainstream press), this is Catherine Cookson.

Some Amazon reviewers try to second-guess criticisms of the book (perhaps an acknowledgement that such criticisms are not without foundation). One says, “It’s a style that I’d assume will polarise opinion; I’d also assume that the author wouldn’t want it any other way.” Critical considerations don’t get much less relevant than trying to predict what others will make of it. Why would James’s unexceptional style polarise opinion? The same reviewer says “James doesn’t write to please the purists.” How would he know? What purists? Another reviewer rightly says the book is “riddled with adverbitis and overwritten” but then adds (without further clarification) “that is the point, I think.” And another draws the following unforgettable comparison: “A writer to whom she’s arguably comparable is Flannery O’Connor […]. O’Connor was famous for her Catholicism, and James is a self-avowed Satanist, but both are astute observers able to capture the human condition concisely.” Tastes differ, of course, but these are the sort of orgiastic songs of praise which no disinterested reader can take seriously.

During the nominations phase of the Not the Booker Prize, James’s publisher said that they had sent out copies of The Dead Beat to the Guardian for review and didn’t get a response. They also commented on the difficulties for small presses in getting their books noticed by the mainstream cultural press. Those are problems I have a good deal of sympathy with, believing that small presses are where much of the most interesting writing is appearing these days. But I also believe that publishing books like The Dead Beat in its current form will add to that difficulty rather than alleviate it.