Occasionally you read a novel which entirely subverts your expectations and, in doing so, becomes one of your favourites of the year. (I had better add, in case anyone suspects slippery phrasing, that this is that book.) I’m not sure what I thought Lazarus is Dead would be: not quite a ‘religious spoof’ as the Edinburgh Book Festival crassly categorised it. Perhaps a contemporary allegory? In fact, such category issues are central to the book. 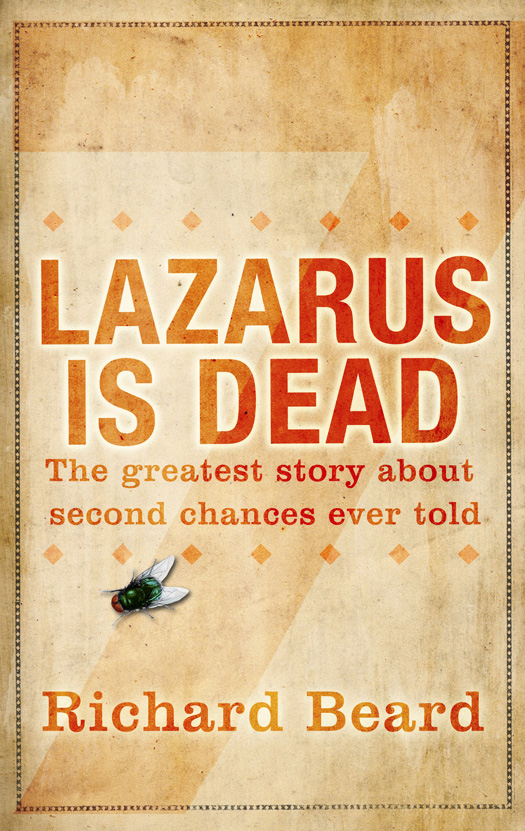 Lazarus is Dead is described on the jacket as “genre-bending,” though blending might be more apt. It is a novel, a biography, and a study in fiction and storytelling. It is both respectful to the biblical scriptures, and more observant than they are to Lazarus’s own story. The only gospel which mentions Lazarus is John, and for a man who is Jesus’ “only recorded friend”, his story is short. Front of stage in his own book, Lazarus here becomes a man in full.

In Beard’s story, Lazarus is a businessman. “His life is ordered, successful, unusual; he doesn’t need enlightenment.” He attempts to carry on with life and work through a worrying decline in health; each time Jesus performs a miracle, his condition deteriorates. He turns to a healer, Yanav, who “likes sick people with active imaginations who thrive on close attention,” and whose treatments unsurprisingly fail to help. Lazarus thinks back to his childhood friendship with Jesus: “as children in small-town Nazareth, the boys could barely be told apart.” Lazarus returns again and again to a pivotal event in their childhood with another friend, Amos, in which Jesus does not come out well and which is decisive in parting the young friends. Indeed, Beard is brutally balanced in his approach, reminding us that in John 11:6, Jesus remained at a distance from Lazarus as his death approached, all the better to ensure an unignorable death and a memorable miracle. Even earlier, when Jesus walks on water:

Innocent people must drown in Lake Galilee. Blameless families are required to grieve. This must be so, otherwise no one would be frightened for the disciples in the storm.

If Jesus is the son of god, then all stories before and after exist in the service of this one incredible story. Every drowning makes its contribution to the glory.

The similarity of Lazarus and Jesus in childhood, their closeness, returns as a more complex thought: the potential for Lazarus to usurp Jesus’ place in the Christian story is a central element of the book. (One might think of Jim Crace’s Quarantine and its alternate take on the origins of Christianity.) As Lazarus’s health declines, local priests and Romans alike are watching him for his friendship with the dangerous Jesus, or, later, wondering if Lazarus himself might be the much-promised saviour. “Doesn’t the messiah come back from the dead?” Beard also explores why the disciples themselves might see Lazarus as a threat.

There is playfulness in Beard’s forensic analysis of biblical verses. When John writes that Lazarus was sick, what was he suffering from? He “records no specific symptoms,” reports Beard. The condition is “so familiar that the bible doesn’t need to describe it.” Beard adds that we know the illness was fatal, but not infectious: Lazarus lived with his sisters, who remained unaffected. “This eliminates tuberculosis and smallpox.” It is also a gut-wrenching and visceral story, a grisly and pain-wracked descent from life toward death.

He tries to speak, tries to say. His thoughts and memories and feelings have come to nothing. It doesn’t matter how much anyone learns. Poc. The knowledge disappears. One thing after another, and Lazarus plucks imaginary objects from the air. The opportunity to marry. Poc. The decision to be good, or the chance once more to see Lydia naked. Poc poc. To have children of his own and to show them the glory of the Temple. Poc.

But there is comedy, too, from the literal interpretation of the Bible story as a human experience. “In the Book of John, Lazarus has a non-speaking role,” Beard reminds us, but here he gets his say. After his resurrection, Lazarus comes to see Jesus, but the disciple Peter tries to put him off, tells him that Jesus is sleeping: “What he did today wasn’t easy.” Lazarus responds, “This time yesterday I was dead. I have a couple of questions.” One of those questions is expressed by Lazarus’s sister Martha: “What for?” It is the unanswerable. Lazarus’s tragedy is to believe that he has been raised from the dead – and before that, made to die – simply as an illustration of Jesus’ abilities, or, worse, as a trial run for a greater death and resurrection soon to come.

Given that the biblical record of Lazarus is so scant – forty-four verses – Beard also uses other texts and interpretations to build his story: Robert Graves, Pär Lagerkvist, E.P. Saunders, and more. But this is no dry analysis: the characters are alive, the scenes vivid, the plot gripping. The story drives us on through a desire to see first how the inevitable comes about (Lazarus dies), and then to see what happens afterwards (which we don’t commonly know). The structure is immaculate: the chapters balanced in an ‘angel-wing’ pattern of declining length, seven to zero representing Jesus’ miracles, and then back again. Beard’s short declarative sentences have a scriptural authority, even as the book explores authority and questions authenticity. This is the author as creator: any biography is, he says, “an attempt to bring someone back to life.”

What helps make Lazarus is Dead such a brilliant achievement is Beard’s ability to balance two ideas at once. He is respectful but playful, rigorous yet inventive. If Truman Capote invented the ‘non-fiction novel’ – I said if – then this might be a new form of fictional biography. Beard uses the existing stories to work out the ascertainable facts, and then builds on these facts to create a new story. It is this transformation, from verifiable truth to imaginative truth, which is the very essence of art.