Blog time is faster than real time. How else to explain that it’s approaching two years since I read and raved over Evan S. Connell’s novel Mrs Bridge? It feels like I just finished it. Back then, in the innocent days of April 2010, I asked “Classics imprints, where are you?” The answer was: here all along, because even then (quite independently of my plea) Penguin Modern Classics slowly and surely drew their plans to do the decent thing. Mrs Bridge, then, will be reissued in July 2012, with Mr Bridge to follow in 2013. I couldn’t wait until then to read the second volume, of course, and now that I’ve read it, have to get it out of my head and onto the screen right now. 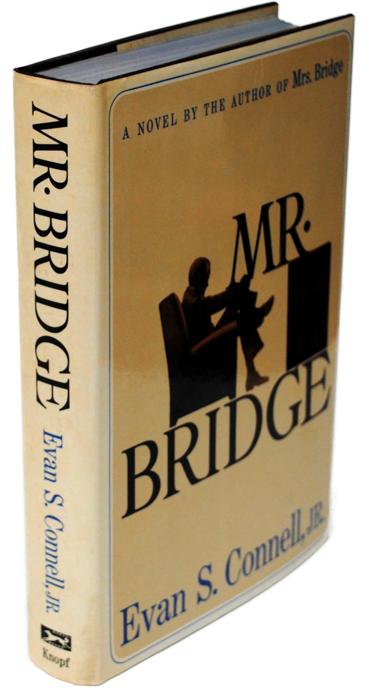 With Mr Bridge, published in 1968, nine years after Mrs, Connell faces the task of making a book both familiar and new, and with all the internal consistencies that a companion volume requires. Frankly to comment on that, I would need to have read Mrs Bridge more recently (rather than just thinking I had). Anyway, Connell has given himself a minor get-out by the very character that Walter Bridge takes. He is a lawyer, a man who sees language clearly but whose vision of humanity is myopic. Words can be interpreted, nailed into place – that is his job – whereas people remain fuzzy and hard to pin down. He has no real idea how his own household operates, and is in awe at the wonders his wife works with it. “The idea of life without her caused him to move restlessly.” So, if his story doesn’t quite chime with Mrs Bridge, we can pretend it’s because he doesn’t notice what she does, says or thinks anyway. This difficulty in his vision is put comically in one of the earliest chapters, as Mr Bridge contemplates his posthumous bequests:

Often he read to himself particular passages from the will, imagining the delight and surprise with which it would be heard for the first time by his wife and children, not merely for the precision of the language but because they had no idea of the value of the investments.

The danger here is that he could be presented as a fool, with no requirement for the reader to get close to him. And certainly, Connell gives Mr Bridge some distancing views, though ones perhaps not unknown in the southern states of the USA in the 1930s. When a photograph is published in the local newspaper of a lynching, his outward response is to ask his wife, “What was this fellow doing that he shouldn’t have been doing?” His unspoken reaction is more interesting: “The photograph evoked a sense of the South: he could nearly feel the oppressive heat and hear the hoots of laughter and the jokes and shouts and lewd suggestions as the lash went whistling through the air and exploded against the Negro’s skin, the cheers and the clapping, the barking dogs, and the guns popping wildly in the pine forest.”

Like its predecessor, Mr Bridge tells a life not as one story but as many: the short episodes are discrete – there are 141 scenes in 360 pages – although people and themes recur. This ‘highlights’ technique makes the book something like, to paraphrase Geoff Dyer on Jack Robinson, a novel with all the dull bits cut out. Except that that is not quite right: rather, to begin with Mr Bridge is like a novel with only the dull bits left in. Mr Bridge’s life, like his wife’s, is not always distinguished by incident, and some of the more beautifully boring passages read like precursors to the anti-humour of Scott Dikkers’ Jim’s Journal or Sylvia Smith’s Misadventures. In these scenes, Connell resists the temptation to make them interesting: as a result of which they become absolutely fascinating. One scene, ‘No Oil’, sets up potential conflict when Mr Bridge’s garage carries out more work on his car than he asked them to; but the risk is spiked when the owner agrees to cover the cost himself. “And that was how it ended.”

Featuring the most humdrum scenes at the beginning sets up the reader for understanding that this is the undercurrent of Mr Bridge’s life (and that he is not unusual in that). This makes some of the later, surprising, chapters stand taller still. Into particular focus comes Mr Bridge’s troubled relationship with eldest child Ruth, who is growing away from him and makes him feel all the poignancy of the unrequited love parents have for their children. It brings out certain responses. In the scene quoted below, much of the force comes from its completeness as a chapter in itself, with space before and after, a floating island of intense feeling. The reader careers off the end, like Wile E Coyote, almost as soon as the drama strikes.

Ruth asked to borrow two hundred and fifty dollars. She would not say why she wanted the money. He refused to consider giving it to her without first knowing why she wanted it. At last she said one of her girl friends was flying to Tijuana and needed company. He said he would not let her have the money. Then he inquired, jokingly, why her girl friend wished to go to Tijuana, and Ruth answered that her friend was going to have an abortion. Before he knew what he was about to do he jumped up from behind the desk and slapped her across the mouth; then he sat down again as though nothing had happened, and Ruth walked out of the study. He noticed with astonishment that the hand which had slapped her was dancing around on the desk as if it was attached to a string. He seized it with his other hand and bowed his head. He could not believe he had struck her. His fingers burned at the memory. When she was a baby he had held her in his arms while she was falling asleep. There were nights when nothing more than the knowledge of her existence had been enough to waken him so that he had gotten out of bed and gone to the crib to watch over her.

This is a lovely thing: the word ‘memory’ triggering a vertiginous drop as the reader follows Mr Bridge from the present to the past; Mr Bridge wondering what went wrong while the reader has similar thoughts from another direction. Most of all, it slices open and exposes the fact that, while delivering great certainty to his children, wife and friends, Mr Bridge in truth hardly knows his own feelings. When they come forward, they do so with a force that shocks him: here his relationship with his daughter Ruth is central, in several ways.

Throughout the story, Connell gives us no shortage of reasons to dislike Mr Bridge: his racism, anti-semitism, sexism and other -isms that are so last century that they don’t even have a name any more. He could be a Blimpish caricature, but in his personal relationships, as stifled as they are, Mr Bridge develops added dimensions. His stunted affection for his wife comprises equal parts protectiveness and pity for her naivety, as when she eats the paper in a fortune cookie, never having seen one before. He realises that “he himself was responsible. He had taken her from the home where she had been sheltered as a child and substituted himself for her father, so she knew nothing she had not been permitted to know.” Their limited lives are the product of a perfect storm of personality types and the times they live in. Late in his life, late in the book, Mr Bridge recognises that “there were many things he had not done because for one reason or another they seemed unsafe – too many, perhaps.”

With his caution and his wife’s innocence, their life together is defined by fear of the unknown. Connell, however, keeps the reader who is expecting a descent into downright drama on the edge of satiety. (Mrs Bridge, written earlier but ending later, covers that need nicely.) Nonetheless there is a feeling of melancholy as the book gets nearer to its end. This is partly the heavier weight of Mr Bridge’s vulnerabilities being allowed to show, and his recognition of the only end of age – no longer contemplating his will with satisfaction, but observing the increasing decrepitude of his contemporaries (“Ultimately they were all going to go”). Finally, however, the regret comes from the naturally ambivalent feeling of completion at the end of any book, particularly one as satisfying as this.