Greg Baxter’s debut A Preparation for Death – a collection of essays masquerading as a memoir – made a big splash with me but not many others. It was bold, unignorable, serious and sexy (or sex-ish, anyway). For his next trick, his first novel, he has taken quite a different path. 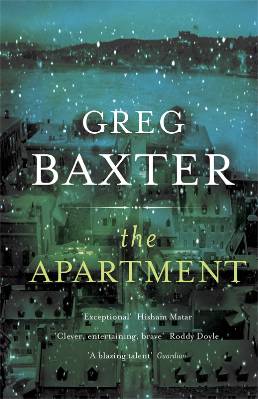 The Apartment has the reader straining their ears from the title down. It is a book with a careful – and welcome – distrust of significance. It begins with shoes and ends with breakfast; why, it’s practically chick lit. It has a maddening, or tantalising, or delicious, refusal to be specific: the narrator has unnamed, his city is unidentified, and even structural and decorative traditions of the novel are absent: speechmarks, chapters. Novels like that are a tradition too, but it’s not one of those either. It is not a forbidding book, nor monochrome, and when details do seep in, they’re real, not invented.

Here’s what we know. A forty-one year old man, American-born (“when I was seventeen I left a town in the desert for a city in the desert”) has moved to an old European capital. He invented a reason to come here, just to give his journey an initial destination. Now that he’s here, he is “trying to live without a preoccupation with endpoints.” He wants not to want anything, except somewhere to live, so he walks through the winter city with Saskia, a friend he met in an art gallery, looking for an apartment.

It’s strange, since we only met a little while ago, to be in a hotel room together, getting ready to search for apartments like we are old friends. We act as though we ought to have things to talk about, but we don’t have those things. We have fallen into a swift intimacy of pure circumstance. Sitting together on the bed now as I lace up my boots it occurs to me how easily this intimacy could evaporate. Our relationship probably could not bear any conflict at all.

Sentences like these – real, modest, recognisable – are the essence of The Apartment. There is a very curious quality to much of it: something like the truth found in understated humour, although it is never actually funny. Baxter has the confidence to render his narrator’s thoughts unobtrusive, and his and Saskia’s exchanges often unenlightening – just like real conversations. “Is that dangerous? I asked once. I don’t know, she said.” “I thought the paintings were magnificent, I said, but I had a hard time explaining why.” (I am having the same problem myself.)

The absurdly right details accumulate, the sort that we don’t normally get about fictional characters. “I never had a taste for sweet things before, but now I do. Now I really like to eat rich, sweet, fruity, creamy cakes, and it doesn’t matter what time of day it is.” He is not passive, our man, but rather actively acquiescent. Faced with a persistent shopkeeper who won’t let him leave without buying something, “I let him win. From now on, I am going to let everyone win.” Some will find the plotlessness (or plotlightness: he buys a coat; I can’t remember whether he finds an apartment) boring. I didn’t. To me, the prose was such a source of pleasure that I was glad not to have the tyranny of a story driving me on; it would, anyway, have been entirely out of keeping with the character and his situation. His story is like the walks he takes through his adopted home: meandering, unrushed, exploratory.

The buildings here are all the same. You walk along one street, turn a corner, and you are on the same street. This is what the foreigner tells himself. The longer I stay here, though, the more I notice imperfections in the repetition. […] You begin to notice that no two buildings are really alike. You begin to see that what you suspected was perfect repetition in an orderly grid is apparent repetition in an imperfect grid, and after a while you learn that what you once considered monolithic is infinitely intricate. And from here you begin to understand the vastness of the place.

We get to learn quite a lot about where our man was before he came here. Surprising contemporary information begins to rise out of the mist: is this the first novel to refer to Bradley Manning and WikiLeaks? (“You must tell no one about that,” says one local to him when he finds out. “Tell no one.”) Yet as much as offering an explanation for his actions, this information provides a springboard for digressive discussions with Saskia, or just with himself. To him everything deserves attention, from the wonder of perspective in art (“I had been born at a time when an understanding of optics was taken for granted, and when realism in art had already been born, perfected and exhausted”) to The Bridge Over the Drina to “the ballistic space of a pool table” in carom billiards.

The tone maintains this egalitarian interest: the form of the novel, its lack of speechmarks, question marks and exclamation marks, not to mention chapters and line breaks, means that each sentence must do its work unassisted. There is no trickery with the author detonating a joke or a twist at the end of a scene, no winks to the reader or sighs of self-satisfaction: it starts, it goes on, it ends. (Not that Baxter can’t turn on the effects when he wants to. “The woman fished a baby onion out of her cocktail. She threw her head back and held the onion over her open mouth as though it were a tiny little man and she were a giant lizard.”) There are novelistic ‘colourful characters’ but they are in the narrator’s memory, not here and now. The lack of obvious markers – is there a literary equivalent of the screen going wavy before a flashback, other than those changes in tense I never notice? – means that the slippage between present and past is subtle, anyway.

When we recommend a book to others, their first question is usually, ‘What’s it about?’ With The Apartment that question is both easy and difficult to answer. It’s about a man who leaves a war zone looking for peace of mind. (“A lot of the guys I met in Iraq were insufferable nerds, idiots, bullies or bureaucrats who could not function in the civilian world, where some degree of creativity is required. They all flourished in the military.”) It is about friendship, and the lines between people (“I wish we could preserve our relationship as it is now for a long time,” he says of Saskia. “I wish we could remain strangers”). It is about the sublimation of guilt. But trying to answer the question of what it’s really about – it’s not about, it is – leads me to want to fall back on my default defusing joke when prodded with such enquiries. What’s it about? It’s about 230 pages.