My already limited rate of reviewing books here seems to have slumped almost to a stop. From labouring under the sense, a few years ago, that I had to write about everything I read – that my experience with a book was in some way not finished, not processed, otherwise – I am now coming to understand that reading and running (as Salinger put it) is a reliable pleasure in itself. Nonetheless, occasionally I read a new book which I want to share, and that urge is compounded when the book comes after a run of duds. The more I read, and the older I get, the fewer qualms I have in chucking aside a book which isn’t pleasing me, and in particular which isn’t special or different or new. There are risks in this, of course – occasionally comes along a “masterpiece” which even some of its supporters say doesn’t really get going until the second half – but more often, the answer to the question “Does it turn into Tolstoy at page 205?” is pretty clear. So, having begun and abandoned a chain of much-touted new releases – a serial literary love-rat – I settled on this innocuous-looking collection. It turned out to be that rarest of pleasures: a book I loved, and could recommend to almost anyone. 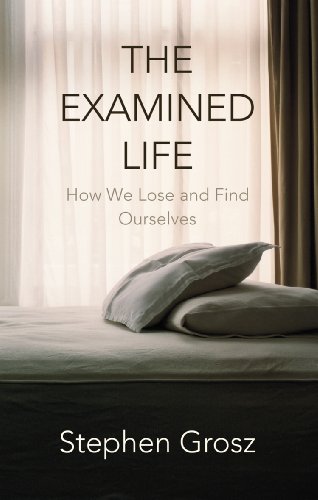 The Examined Life carries a manifesto in its title: if, as Socrates said, the unexamined life is not worth living, then examining a life must give it meaning – or return meaning to it. This examination, I presume, is how Grosz sees his profession as a psychoanalyst. I knew nothing about psychoanalysis before reading this book, and when I finished I bought Janet Malcolm’s Psychoanalysis: The Impossible Profession, but The Examined Life is a pretty good jargon-free primer in itself. There is plenty of respect for Freud, father of the discipline, and clear support for the psychoanalytical belief that childhood events are the engine of our development.

It is not a self-help book, or not explicitly. It is closest in form to one of those books – David Eagleman’s Sum, Alan Lightman’s Einstein’s Dreams, and above all Italo Calvino‘s Invisible Cities – which interrogates a subject (death, time, place) from different angles, producing a polyphonic song from the slenderest of individual notes. Here the subject is human life: its unhappinesses, blockages and limitations. Grosz has taken more than thirty cases from his decades of practice – this debut author is 60 years old – and condensed them to their psychoanalytical, and human, essence. Each story is a quest, a detective investigation, where the key to the success of the analysis (“the listening cure”), the answer to the question, comes less from the analyst’s words than from the patient’s*. “Our job,” says Grosz, “is to try to find a useful question.”

Grosz has the knack, which derives not from experience only but also literary skill, of boiling down a problem to its essence. Here is an extreme example:

Mrs C., who owned and operated a small restaurant with her husband … was a mother of three. She wanted help because she felt anxious and suffered panic attacks. In our first meeting she said that she found it ‘difficult to relate honestly’, but it was only after several months of therapy that she told me she was having an affair with her children’s nanny, a woman who had been working for the family for the past seven years, since shortly after the birth of their first child. Now – contrary to an agreement with her husband – Mrs C. was secretly trying to get pregnant because she could not bear the thought of losing her nanny.

The subtitle of The Examined Life is How We Lose and Find Ourselves. This suggests that for each problem reported, there will be a solution. In a sense this is true, but the solution is not a plan of action; it is simply the discovery, acknowledgement and understanding of the nature of the problem. With Grosz’s voice – patient, paternal, wise – this becomes a seductive pattern, and after each account I was torn between the urge to guzzle another or – following Mavis Gallant’s advice not to read more than one story per day by the same writer – allow it to settle and mature before moving on.

It is difficult to sum up the force and formal perfection of the pieces here without extracting one in full. Most contain something that felt to me like a punch in the gut, perhaps because so many link back to the patient’s childhood. One woman recalls a miserable time at boarding school, and payphone calls to her parents: “I was crying hysterically, ‘Please can I come home, please can I come home?’ and being told, ‘No, you can’t come home.'” A man who, as a boy, could not remember being alone with his busy mother, developed a bedwetting habit (“a private conversation – something only they shared”), and didn’t grow out of it until she died. Another as a child lived in fear of his father’s “sudden rages” and felt that “he couldn’t wait to get away from me.” All this was profoundly affecting to me, as someone to whom parenthood is still a novelty, and most definitely still a challenge: I feared seeing elements of myself, not in the children, but in the fathers. The feeling of discovering something momentous was enhanced when I read the chapter on ‘How praise can cause a loss of confidence,’ where Grosz argues convincingly that the easy praise we scatter over our children these days is more harmful than beneficial. “If we do it to avoid thinking about our child and her world, and about what our child feels, then praise, just like criticism, is ultimately expressing our indifference.” More than this, I thought of how easy it is to drift into semi-engagement when supervising my four-year-old son’s play. “Being present,” says Grosz, “builds a child’s confidence because it lets the child know that she is worth thinking about.”

Without this, a child might come to believe that her activity is just a means to gain praise, rather than an end in itself. How can we expect a child to be attentive, if we’ve not been attentive to her?

Being present, whether with children, with friends, or even with oneself, is always hard work. But isn’t this attentiveness – the feeling that someone is trying to think about us – something we want more than praise?

These explanations – how obvious they seem! – felt life-changing to me, and the pleasure I took in this book went far beyond the literary. It is full of revelations to the uninitiated, such as the many ways the human mind has of deceiving us. We learn about ‘splitting’ – the unconscious strategy that places aspects of ourselves that we find shameful into another person or group (think of an evangelical preacher found cottaging, or indeed Sir Hugo Coal in Patrick McGrath‘s novel The Grotesque) – and about paranoia coming from the deep-rooted fear that nobody cares about us. There is, after all, only one thing worse than being talked about.

There is a risk of Grosz coming over like Robbie Coltrane in Cracker, the superman who sees intuitively what nobody else does. But it is experience and interest in his subjects that gains him the key to each story – and not all the stories have a key – and they take time to find. Midway through one account, my eyebrows peaked at the line “One Monday, during her second year of psychoanalysis,” particularly as Grosz has already told us that many patients will be seen five days a week. Another, a man living with HIV, sleeps through most sessions for three years. This is a time-consuming – and presumably expensive – quest.

Not incidentally, one of the pleasures of The Examined Life is Grosz’s literary understanding: he brings relevant writing to bear on the subjects, from Beckett’s Endgame to Melville’s Bartleby. It’s fitting that Grosz’s agent said in his letter submitting the book to publishers, “Think Carver, Cheever, Calvino, not Freud, Lacan, Jung.” If it is not quite true to say that literature has a civilising influence, then at least we know it can provide signposts through the thickets, with a little help from one who knows.

* strictly, the term is analysand. Let’s stick with patient.