I have admired Christopher Priest’s early novels The Affirmation and The Glamour – both published around 30 years ago – so after seeing high praise for this, his latest novel, I thought it might be a good idea to get up to date. It particularly interested me as it comes less than two years after his previous novel The Islanders, which was his first in a decade. Is Priest, who will be 70 years old this month, having a Roth-like late renaissance? 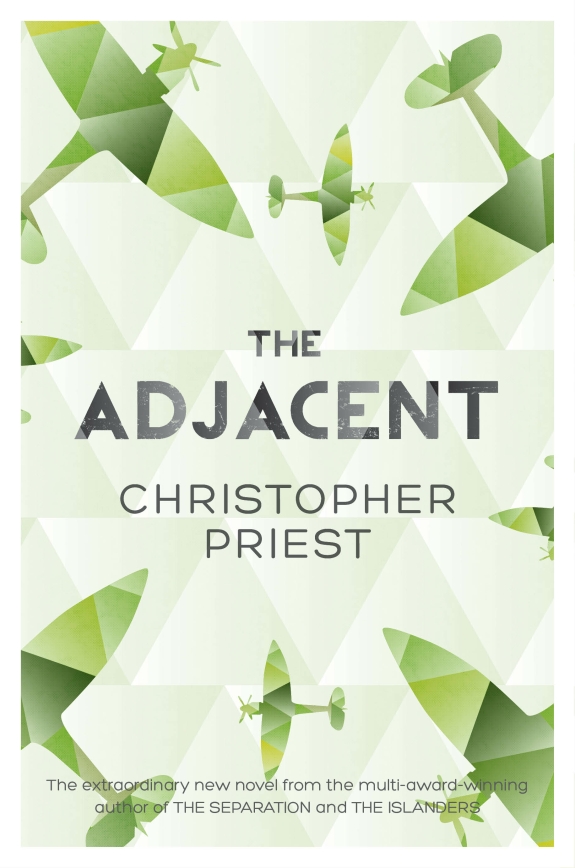 The Adjacent, at 420 pages, is almost twice as long as the other Priests I’ve read. I mention this up front because I think it may be a factor in my taking a little less pleasure from it than I did from the earlier novels. At the same time it is a book whose structure and nature requires it to investigate different stories. And for stories read worlds: the longest, and I think best, section of the book is set in the Dream Archipelago, which Priest has explored before in the book of that title, as well as in The Islanders and (to a lesser extent) The Affirmation. As I’ve read only one of these, it’s possible I would have found The Adjacent to be a richer experience with better knowledge.

One could argue, however, that a novel which requires prior knowledge for its effects is not really a standalone novel at all (which is what I thought after reading, cold, Pat Barker’s Booker-winning The Ghost Road). And even within The Adjacent, there is a sense that the book’s qualities lie less in the stories themselves than in the space around them and how the reader fills it. I had better explain what I mean.

The central story is of Tibor Tarent, a photographer in a war-torn Europe sometime in the middle of the 21st century. Climate change has made the UK vulnerable to hurricanes, euphemistically referred to as Temperate Storms, which are given the names of cultural figures (Edward Elgar, Federico Fellini, Graham Greene). Britain is also now a Muslim country, the IRGB – presumably Islamic Republic of Great Britain – though there is no development of this idea. Tarent’s wife Melanie was killed while they were in Turkey, the victim of a strange weapon which annihilates everything within a triangular area and leaves nothing but flattened black earth. A similar, much larger, weapon has recently destroyed Notting Hill, killing over a hundred thousand people. Tarent is brought back to Britain, for reasons unknown to him, where he forges a relationship – well, has sex – with a high-ranking defence official he calls Flo. Alternating with Tarent’s narrative are stories from the first and second world wars, from the present day (that is, the past in the novel’s main time scheme) and from the Dream Archipelago. Themes and settings of Priest’s earlier work recur: war in the air, illusionists, pairings. Each of these stories features a man and woman whose names and qualities chime with those of Tarent and Melanie: there is a sense that we are reading the same story, or the same relationship, from different angles.

Many writers see their characters’ journeys as something to get through so they can arrive where they need to be for the purposes of the plot. Martin Amis (a contemporary of Priest’s on the Granta 1983 Best of Young British Novelists list) wrote in The Information of the slog of getting characters from one location to another. With The Adjacent, the journeys are the point. They enable the reader to share the mystification of the characters. They give Priest the opportunity to fill in the details of each world, and also to make the surprises stand out because they are set against a bed of such dull routine. The surprises include the concept of adjacency, or more fully the Perturbative Adjacent Field, which is discovered by Nobel Prize-winning physicist Thijs Rietveld sometime in the 2020s or 2030s, and developed as a passive defensive weapon which “Will End War.”

Using what quantum physicists sometimes call annihilation operators, an adjacency field could be created to divert physical matter into a different, or adjacent, realm. An incoming missile […] need not be intercepted or diverted or destroyed – it could be moved to an adjacent quantum dimension, so that to all intents and purposes it would cease to exist.

And the stories fall into place: we infer that someone has made a very non-passive weapon from the adjacency field, and that the various iterations of Tarent and Melanie are adjacent versions: the matter which the adjacency field removes may cease to exist “to all intents and purposes,” but it has to go somewhere. Aside from the pleasant sudoku-like mental exercise this generates – keeping track, flicking back – Priest expands it further, floating the suggestion that, for example, differing experiences of the same event are not necessarily matters of interpretation, but actually reflect different realities.

All this is nicely done, and Priest has a knack with chapter endings which open possibilities like a flower in the reader’s mind, just as he refuses further explanation: particularly strong are the scenes where Professor Rietveld demonstrates the adjacency field to a photographer, and where Tarent slowly understands what must be in a coffin he observes. However these are also part of the weakness of the book, which is the sense I had that the stories exist only to lead us to their ends, and I took little joy from the stories themselves or the way they were told, often at length. The delight was in the connections, the gaps, the anticipation. The intrigues of the book, for most of its length, are technical rather than emotional or psychological, which is odd given the central conceit, of human loss told from several different angles. For me, Tarent’s mourning of Melanie – or, in another strand, Krystyna’s of Tomasz – never felt like more than a prop hung from a strong science fictional idea. This is not helped by the manner in which women in the story generally succumb sexually to the men not long after meeting them, and the reiterative nature of the story, where it happens over and over, exacerbates the point. There is internal logic to support the easy relations each man and woman enjoys, if they have already known one another in a different dimension, but it still feels too perfunctory, like the occasional what-exactly-is-this-thing-you-call-love-Captain dialogue. (“I am a woman in good health with physical needs. Sometimes those needs become urgent.”) It seems apt for a book which, with its visions of war after war after war, seems very much a boys’ story.

And yet, just as my interest in The Adjacent was flagging, Priest turns to the Dream Archipelago in the book’s longest section, ‘Prachous’. This brings together all the central elements of the story which have gone before, refracted through imagination, and makes something enjoyable and impressive from them, as well as having the most interesting events. Perhaps this is Priest’s enthusiasm for the Dream Archipelago showing, or perhaps I should have had more faith in him before then. It sets up the coda to the novel beautifully, and brings together the worlds we have encountered with the sort of effortless unobtrusiveness which is not really effortless at all. I must admit that the finale still had less emotional punch than I think was intended, but I finished the book with renewed interest in Priest’s work, and a determination to revisit his Archipelago soon. Not least, it shows that in comparison with the later output of some of his Granta 1983 contemporaries, Priest is holding up the SF/slipstream end pretty well. Perhaps some trickery is involved.