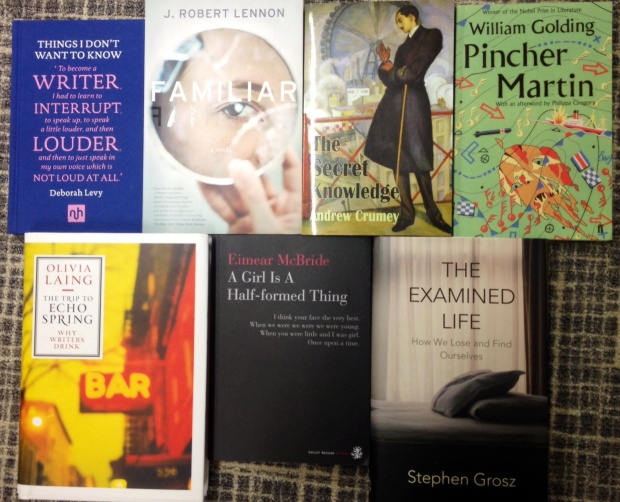 Interesting – perhaps – that those are all non-fiction, where my reviewed choices below are all-but-one fiction. Do I find it easier to review novels? The books below were all read, or re-read, by me this year, and are listed alphabetically by author.

Martin Amis: Money
No surprise that I rate the book which gave me my online identity. This is the book which proved that Amis was not just a writer of short comic novels: he was also a writer of long comic novels. The voice he developed for John Self is a miracle of sustained attention to detail. Money is one of those books where it’s clear the author sweated over every single word. And it was worth it.

J.M. Coetzee: The Childhood of Jesus
I expected this book to be all over the prize shortlists and end-of-year roundups, but it seemed to slip quickly from view after publication early in the year. Perhaps it was the conscious elusiveness of the story, screaming allegory from every page but never quite being nailed down. That was one of the reasons I liked it so much.

Andrew Crumey: The Secret Knowledge
New work from Crumey is always a delight, though he makes us wait – 5 years since Sputnik Caledonia. Once again he has evaded expectations with a novel which is less immediately lighthearted than most of his previous books, but just as provocative, containing parallel worlds, ideas on art and mass culture, and guest appearances from Walter Benjamin, Hannah Arendt and Theodor Adorno.

William Golding: Pincher Martin
This is a book with an unforgettable twist or two, one in the very last sentence, but which only gains in power when re-read. It is full of strange wonders, not least how so much is packed into so few pages, and how a book so ultimately unknowable can at the same time be as clear as the water its ‘hero’ lives in. If the only Golding you have read is Lord of the Flies, try this.

Stephen Grosz: The Examined Life
One of two debuts on my list, and the only non-fiction title. The conceit is simple: a psychoanalyst tells us the stories of some of his patients. The results are simple and – to me – enormously affecting accounts of what can go wrong, particularly between parents and children, and how it can be possible to begin to put it right.

Chloe Hooper: The Engagement
Another book that I expected to conquer all this year, and which seems to have sunk without trace. Hooper’s second novel is not just a page-turning psychological thriller – though it certainly is that – but also an inquiry into sexuality, male-female relations, and the power of stories. I read it twice and it stood up brilliantly.

J. Robert Lennon: Familiar
Lennon, like Hooper, has the gift of telling stories so seductively that it’s easy to overlook how much he makes you think at the same time. Here we get a story of a woman who finds herself living a new life, everything suddenly and unexplainably changed. Perhaps, as with The Examined Life, it was the acute understanding of parenthood that so floored me here.

Eimear McBride: A Girl is a Half-formed Thing
Much-vaunted by critics and at least one prize jury, McBride’s amazing debut is worthy of all the praise. It is the sort of story you simultaneously want to read and to look away from, and the brittle poetry of the language is a perfect vehicle for the familiarly dark events in this Irish family’s life.

Muriel Spark: The Driver’s Seat
A short Spark shock which, like Pincher Martin, loses none of its impact when you already know its unforgettable ending. A comedy, like much of Spark’s work, but undeniably grim and odd even by her odd standards.