I wrote about Lorrie Moore a couple of years ago, after having mixed feelings about the few stories of hers that I’d read. Now she has a new collection, her first in 16 years, though it’s pretty skimpy at eight stories in 160 pages. More than that, four of these stories were in her 2008 Collected Stories (you can read one of them here), so what Moore’s fans will get is four new stories in 80 pages. Only one of these four is entirely new, as three previously appeared in magazines: Harper’s, The Paris Review and The New Yorker. 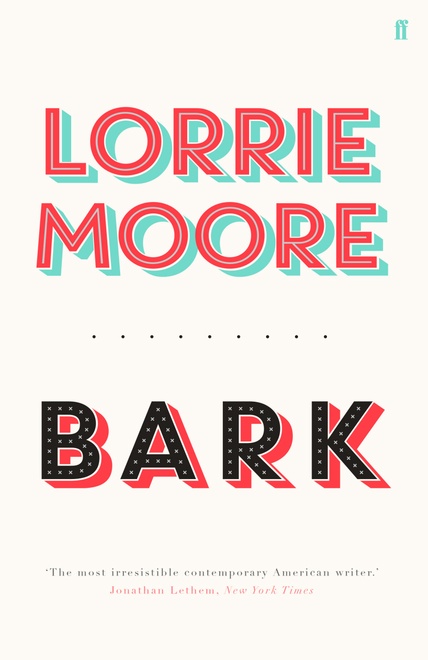 Bark is an interesting reading experience straight after Mavis Gallant. I wrote that some of Gallant’s stories made my eyes glaze over: this never happens in Bark. Moore works very hard to give the reader a really good time. Her stories are stuffed with smart observations, clever ways of seeing and zingy jokes – and that is the only difficulty I have with them. They are so stuffed with novelty and display, that moments which might resonate beautifully within plainer prose, tend to get lost in the noise. In the first story, ‘Debarking’, a reference to the central character receiving “a divorce petition mailed from a motel” is nicely understated and suggestive, but struggles to make itself heard amid less subtle stuff, like a gag a few lines earlier about middle-aged dating being “a planet of the apings!” The story tells us about Ira, trying to get back in the game after his divorce. He is trying also to balance the fact that the two most important females in his life now are a woman, Zora, he barely knows but hopes to get to know better, and his daughter Bekka, of whom he has shared custody, with all the mess that that entails. With Zora, he is unsure whether he really thinks things about her or just wants to (“She had written her phone number and signed off with a swashbuckling Z – as in Zorro. That was cute, he supposed. He guessed. Who knew”). With Bekka we get observations that, if they come from life, would probably have been best left as Facebook status updates. “[Bekka] had once, in a bathtime reverie, named her five favourite people, four of whom were dogs. The fifth was her own blue bike.” (That’s cute, I suppose. I guess. Who knows.) ‘Debarking’ captures well the grimness of desperation dating, and the way participants detect the worst in one another without thinking of how they might themselves be coming across. This is exemplified in a genuinely funny and surprising phone call between Ira and Zora, which seems to justify his thinking earlier:

Oh, the beautiful smiles of the insane. Soon, he was sure, there would be a study that showed that the mentally ill were actually more attractive than other people. Dating proved it!

Ira’s uncertainties reminded me of Abe Simpson courting Bea Simmons (“Well, I was wondering if you and I you know, might go to the same place at the same time and… Jeez! You’d think this would get easier with time!”). Moore has a knack of filling her characters with these very recognisable weaknesses. In the story ‘The Juniper Tree’, a woman is happy to be persuaded by her own excuses for not visiting her terminally ill friend. When a mutual friend rings to say that she has died, our narrator breaks down. “‘I feel terrible,’ I cried, as if this were what mattered.” The story goes in interesting directions after that – of the cannot-be-disclosed-here variety – and provides a surprising depiction of guilt and grief.

The subject matter of Moore’s stories tends to be from a range of big things: illness, break-ups, death. The third story in Bark, ‘Paper Losses’, takes us back to divorce, with our lead, Kit, finding in the courtroom that “the county owned her marriage and that the county was now taking it back like a chicken franchise she had made a muck of.” That’s a nice simile, but Moore extends it over the following lines until it has, to coin a phrase, irretrievably broken down. She knows how to detonate a phrase though: Kit, on holiday, gets up early to watch turtles hatching on the beach but the guide keeps them there all morning to enable as many tourists as possible to see them. “He took them over to the water’s edge and let them go, hours too late, to make their own way into the sea. And one by one a frigate bird swooped in, plucked them from the silver waves, and ate them for breakfast.” Elsewhere, the effect is more slick than rich, and Moore sometimes reminds me of an American sitcom where the the humour comes not from the setting and the people but from characters saying witty things to one another. On the same page as the passage above, Kit’s friend says, “Soon you, like me, in your next life, like me, will want them old and rich, on their deathbed, really, and with no sudden rallyings in the hospice.”

This frantic waving from author to reader starts to seem gauche. Perhaps Moore could turn it down, but would these stories exist in toned-down prose? The slightly hysterical style is intrinsic to the mindset of the characters, which is itself a cause for concern. Many authors could be accused of sameness – seventy years ago, did jumped-up bloggers complain that Greene wrote too much about Catholicism? – but with Moore, not only do subjects recur, but characters sound too similar also. They all seem to respond to stress with wisecracks, and the effect is to make all the stories seem to take place in a parallel world where people are chipper and desperate at the same time, and exchange pithy dialogue with their partners. Over the length of a book, this becomes such a self-contained world – Lorrieland – that it jars and barks the shins when real world elements creep in, as they frequently do: 9/11, Abu Ghraib, Obama’s election, “the new economic downturn”. (Scanning the original publication dates for the stories that include these elements provides reassurance that they were headline news at the time of writing.) Those previously-listed subjects of the stories – illness, divorce, death – end up seeming like shop-bought ballast to counter the hectic drollery. (When I mentioned Moore’s compulsive joking on Twitter, someone responded, “I sort of love her, but worry that she thinks puns reveal hidden truths.”) The worst offender in this respect is the final story, ‘Thank You For Having Me’, which is the only previously unpublished piece in the book. The penultimate story, ‘Subject to Search’, regains its feet after some terrible jokes (a sign-language mishap is referred to as “a Freudian slip of the dumb”) by showing, horribly, a life where the only way of achieving a happy ending is to cut back into the past. (“He clasped her hand: electricity burst into it then vanished as he let go.”)

What this leads to is the best story in the book: ‘Referential’ doesn’t try to be funny, or not for long, anyway. It is about a mother and her “deranged son”, and her visits to him in a hospital or institution. When Moore writes about how “there was still sweetness in his eyes, the sweetness he was born with”, and then that “once her son had only wanted a distracting pain, but then soon he had wanted to tear a hole in himself and flee through it,” I think of my own sons, still mostly sweetness, and find it terrifying. This unleavened bitterness is bracing after all the stings and rimshots in the other stories. I realise I am making it sound as though I don’t like Moore’s work at all. I do: she is never boring and always entertaining. But the wit which for others intensifies the pleasure in her stories, for me dilutes their force.