Recently I read Here and Now, the letters of J.M. Coetzee and Paul Auster (I don’t recommend it). In it, Auster claims that he never reads his reviews. It’s not an uncommon stance, but I wonder how true it is of writers generally. At a literary event a few years ago, I met two Booker-winning authors. Both, when I was introduced to them, immediately had a strikingly clear recollection of everything I’d written about their books (which, given that it wasn’t all complimentary, was awkward). I raise this because the author of this book, Jonathan Gibbs, is what we might call a friend of this blog. He has commented here, and we follow one another on Twitter, and occasionally exchange tweets. I have never met him or spoken to him, but is that necessary these days to be considered to ‘know’ someone? He is also a critic whose insight I admire and a blogger whose fluency I envy. So, ‘knowing’ Gibbs, should I review his book? Should my review be trusted? Is this a fair review, or does it just look like one? 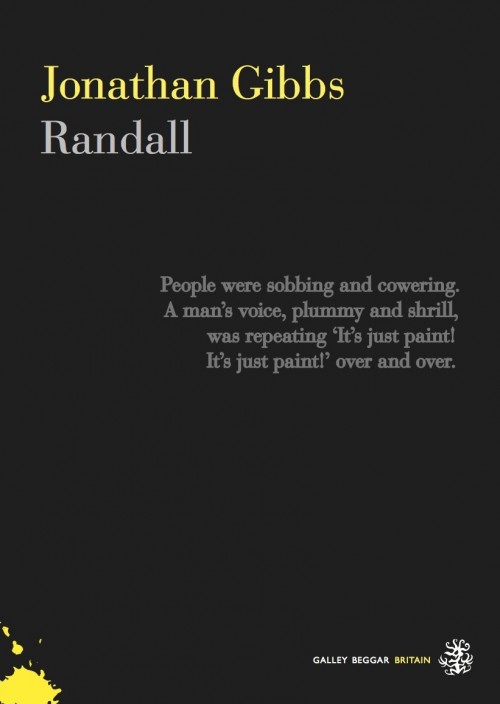 Randall, or The Painted Grape is published by Galley Beggar, which is in a shortlist of one for Overachieving Small Press of the Year, having published Eimear McBride’s multi–award–winning A Girl is a Half-formed Thing. Comparisons with McBride will not flatter many debut novelists, but Randall stands on its own. When deciding how to judge it, I thought of Donal Ryan’s The Spinning Heart last year: not perfect, but full of excellent things; a good novel, but a very good first novel.

Randall is about the Young British Artists scene of the 1990s (has anyone written a novel about them before? Like many great ideas, it seems so obvious now). The difference between the real YBA scene and the one in Randall is that here, Damien Hirst died young and before he became famous. That’s helpful because, viewed one way, there are enough similarities between Hirst and the novel’s title character to raise a lawyer’s eyebrows. Ian Randall Timkins, his sitcom-geek surname wisely abandoned to better enter into modern legend, is an artist whose reputation exceeds him, whose work sounds terrible, but who is framed so beautifully by Gibbs that we feel the intoxication of what it must have been like at the time, we believe the excitement and forget that his work “might just be the most pointless, vacuous, unforgivable and irredeemable shite.” Randall is, in short, in the business of bullshit, with the emphasis equally on both words.

That is at the heart of the book: the curious relationship between art and commerce. The book is narrated after Randall’s death by his old friend Vincent, who was a City trader and has now written a book about Randall. He is delivering it to Justine, Randall’s widow and Vincent’s ex, when she discloses to him some extraordinary work that Randall has left behind. Vincent and Justine’s exploration of the work – paintings that appear calculated to be obscene and offensive to everyone whom knew Randall well – and their quandary over what to do with it form the frame of the book, with Vincent’s memoir of Randall spliced through their story.

Both parts have momentum, and like any good first person narrator, Vincent is more important to the story than he might initially appear. He peppers the book with Randallisms, the bons mots of his friend that he wrote down avidly at the time:

“Conceptual art – art you don’t have to see to get.”

“Art is the occult practice of omnipresence, of getting in people’s faces when you’re not there to do it.”

This helps Randall with the important business of making a name for himself, which is at least as important as making art. After all – another Randallism – “There’s only two things you can do with art: make it, and buy it. Everything else – talking about it, thinking about it, selling it, looking at it – either comes under one of those two, or doesn’t count.” Naturally, Vincent makes a useful foil to Randall, both as a friend and a fictional character, with his financial background. There is much interesting stuff about how art and money work together and rub off on one another, even how their jargony worlds are closer than the difference in levels of respect they enjoy might suggest. Not for Randall the fate of Mark Rothko who – according to Randall – killed himself because he met the people who bought his paintings. Ownership is another key element of Randall – of art, of ideas, and of other people. It also makes us think about how we respond to art (“the confidence trick of looking at it”, as Vincent has it), the conviction of our opinions and how swayed they are by reputation or personal knowledge (and this applies to books too, which means my rambling introduction above wasn’t entirely meaningless). There are scenes and exchanges on these subjects which had me rereading them in wonder.

So in many ways Randall doesn’t feel like a debut, or rather doesn’t feel like the many debuts which have been written too early, before the author knew what they wanted to say, how to say it and most importantly, how the two meet. It has style and aplomb, and is brimful of brilliance. Gibbs can turn a simile (even if he doesn’t always like them as a reader): “Her smile was short and tight, like the smile of someone struggling with a key in a lock.” He has the mot juste for most occasions, as when one of the subjects of Randall’s posthumous porn paintings is described as wearing an expression of “eager surprise”. He gets how people behave: when Vincent meets Justine, whom he is not really over, for the first time in years, and they embrace, we read about

the way that, after a long moment, that he would have had still longer, she moved her hands to his arms, just above the elbows, and gave him two brief squeezes there, the signal to disengage…

And these are just from the first few pages.

In other ways Randall does feel like a debut. It doesn’t always match its own high standards, particularly the Great Day of Art – the scene that the words, and splashes of Randall Yellow paint, on the cover come from – which is a description of a tiresome event that doesn’t transcend its subject. The closing scenes, too, are disappointing – or frustrating, after the delight of the book generally – where a confrontation between Justine, Vincent and Randall’s son Josh feels forced, and the very last line appears to reveal something which eluded me, or else was a joke about the art world that I didn’t get.

The subtitle of the book comes, we learn, from Abraham Cowley’s poem ‘Ode of Wit’: “Like Zeuxes Birds fly to the painted Grape.” It refers to verisimilitude, and to how we tell the difference – and whether there is one – between art and something that just looks like art. Randall, anyway, looks like a good book – that handsome design, that publisher pedigree – and sure enough, it really is.