Mihail Sebastian was a Romanian writer best known for his plays and his journal of 1935-44 (“The Fascist Years”) which recorded Jewish persecution and the antisemitism that even his friends displayed toward him. One handy example arose when he asked his mentor and tutor Nae Ionescu to write a preface to this novel, and Ionescu included antisemitic passages – which Sebastian published anyway. The reception to the book and the preface was such that, when Sebastian later published a collection of essays summarising the experience, he called it How I Became a Hooligan. Having been made homeless by antisemitic laws, he nonetheless survived the Second World War and, the author bio in this first English translation briskly tells us, was hit by a truck and killed in early 1945, at the age of 38, as he was crossing the road to teach his first class. Having read this book, that strikes me as a loss to literature as great as that of Bruno Schulz or Jiří Weil. 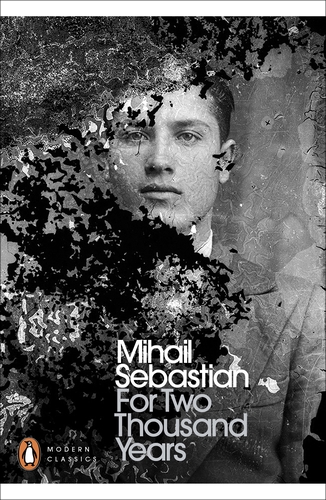 For Two Thousand Years (1934, tr. 2016 by Phillip Ó Ceallaigh) is one of the most unusual, seductive and beautiful books I’ve read in years. It has lightness of touch coupled with astonishing range. The epigraph, from Montaigne’s ‘On the Art of Conversation’ (“I not only dare to talk about myself but to talk of nothing but myself…”), tells us what we are in for: a discursive, digressive, circular account of a time in a man’s life. And I admit I was taken by the opening paragraph, which exemplifies Sebastian’s style:

I believe I’ve only ever been afraid of signs and symbols, never of people or things. My childhood was poisoned by the third poplar in the yard of the Church of St Peter, a tall, mysterious tree, its shadow on summer nights falling through the window, over my bed – that black band slashing across my bedcovers – a terrifying presence I could not understand and did not try to.

Here it all is: the transport from higher thought to direct experience; the attention to detail which sounds like life (“the third poplar”); the heights of emotion (“poisoned … terrifying”); the sense overall of a real literary intelligence. The passage also, to me, has a classical feel to it: the opening sentence in particular sounds like something you’ve heard before, like a thought that has been circling for a long time before Sebastian plucked and pinned it for us.

There are many paragraphs like this in For Two Thousand Years, though it’s worth adding that they don’t always give themselves up so easily. This is a scattered, loose book, a novel in the form of a fictional diary, and it flips and leaps to and fro. The unnamed narrator (he’s not unlike Sebastian) doesn’t always explain who people are when he first mentions them, which is truthful – a real diary wouldn’t explain – if challenging. “I’d like a big, clear, severe book with ideas that challenge all I believe in,” he says early on. The plot, such as it is, describes the drift toward social unrest in Romania, beginning in 1923 when laws granting citizenship to minorities led to nationalist protests and ultimately the rise of the fascist Iron Guard. At this point our man is a student, and we get plenty of evidence of the crawling antisemitism among his contemporaries. “I received two punches during today’s lectures and I took eight pages of notes. Good value, for two punches.” Back at home, one Jewish businessman offers assurance: “It’s nothing, lads, keep your chins up, God is good, it’ll pass,” but another, with a longer memory, murmurs, “For two thousand years…” Sebastian’s narrator is not without conflicts himself.

I have an immense longing for simplicity and unawareness. If I could rediscover some strong, simple feelings from somewhere centuries back – hunger, thirst, cold – if I could overcome two thousand years of Talmudism and melancholy, and recover – supposing my race has ever had it – the clear joy of life…

The status, identity and role of the Jew in his society is the central thread of the book. Most of the episodic chapters are taken up with our man encountering new and old people in his life. There’s Ghiță Blidaru, the professor who persuades him to change his studies from law to architecture. “He is the only man to whom I have ever felt it necessary to submit myself, but I do it with a sense of fulfilment and reintegration rather than of surrender.” There’s his sometime girlfriend Marga Stern. “I re-read what I wrote above and laugh. Dear girl! What is left of you in this writing that complicates you, comments on you, changes you?” There’s the “dissident Zionist” Jabotinski and the narrator’s friend S.T. Haim, whose opposing views give us thrilling oratory on Zionism. “Great Britain needs a right-hand man to guard the Suez Canal, so it’s invented this myth of a ‘Jewish homeland’. ‘Homeland’ is too nice a word. No doubt some Quaker or Puritan came up with it. But millions of sentimental Jews have taken it at face value.” There’s Marjorie Dunton, whose status with the narrator (“yes? no? yes? no?”) keeps us guessing. Sebastian even manages to give a satisfying and insightful angle on sleeping next to a stranger (“He’s the first person ever to enter my life without knocking”).

This is what I meant by ‘wide-ranging’. There are passages on town planning, Yiddish v Hebrew, poetry (the poet Arnold Max, whose “passion for poetry [is] half-simulated in order to give some sense to the terrible void in which he lives and from which he flees”), and of course icy, furious antisemitism, even by those friends and acquaintances, such as Maurice Buret. “I detest the agitated, convulsive, fevered aspect of the Jewish spirit. […] A clearheaded Jew is a phenomenon. The majority are sleepwalkers.” This cornucopia aspect doesn’t make For Two Thousand Years easy to follow, though it’s not a strongly plot-driven book anyway, other than a general progression toward social and political anarchy and dissolution. But its subject matter doesn’t stop it from being bright-eyed, relentlessly vivid and often funny.

The abundance of beards in period of social unrest, times of revolt or upheaval, should be noted. It’s the handiest way people have of making themselves mysterious.

There is a conflict sometimes between the beauty of the individual passages and the failure – or refusal – of these to flow more easily into one another. But finally my sense on For Two Thousand Years is that, like any classic of a type we’ve not seen before, it is a book which needs to be read and re-read and which, over years, will become a reliable friend for life.