Following the success earlier this year of Hans Fallada’s rediscovered novel Alone in Berlin / Every Man Dies Alone, I was keen to read more. Step forward Melville House, who have obliged by reissuing Fallada’s most famous novels, The Drinker and Little Man, What Now? To me, the latter had always been a Morrissey song. In the song, the ‘little man’ is a faded star (a very Morrissey motif), whereas in the book, a glorious past is more than the central character could hope to attain. 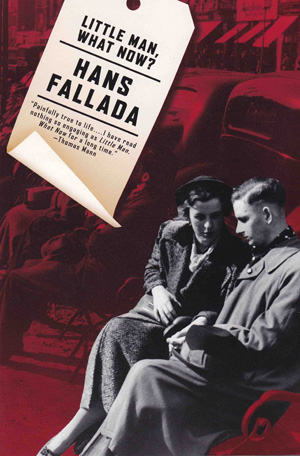 Little Man, What Now? was a success on publication in 1932, serialised in over 50 German newspapers and selling half a million copies worldwide in its first two years, by which time it had been filmed twice. This was surely due to its forthright presentation of the woes of millions of Germans in the dying days of the Weimar Republic, with massive unemployment and hyperinflation; Fallada presents the latter in the confused words of an old woman, who has her own explanation for where all her money has gone (“Can a pound of butter cost three thousand marks?”)

‘I’m going to tell you. I now know that my money’s been stolen. Somebody who rented here stole it. But I can’t recall the names, so many people have lived here since the war. I sit and brood. I also realize it must have been someone really clever, because he falsified my housekeeping book so I wouldn’t notice. He turned three into three thousand without me realizing.’

Listening to this are our little man, Pinneberg, and his Lammchen (‘little lamb’), his recently pregnant girlfriend with whom he now needs to set up home before their ‘Shrimp’ is born. He’s sure he’s in love with her: well, fairly sure. When she throws off his compliments about her prettiness (“Who’d want to dance with a nanny-goat like [me]?”), “[a] feeling he didn’t quite like came over Pinneberg. ‘She really oughtn’t to be telling me this,’ he thought. ‘I’d always thought she was pretty. Perhaps she isn’t pretty after all.'”

The main problems they face, however, are those which every little man of the day faced: the scarcity of work, the worthlessness of money, and the uncertainty whether their future would best be secured by the Communists or the promising-sounding National Socialists. The book was written before the rise to power of the Nazis, and they feature rarely in the book (Fallada would make up for that in Every Man Dies Alone). Instead, his concerns are the quotidian struggle. “Everything gets more complicated when you’re poor.” Even when Pinneberg finds work, and “he really is happy … behind that happiness lies the fear: will it last? No, of course it won’t last. So, how long will it last?”

Daily labour – one might say the pleasures and sorrows of work – is something which Fallada represents very well (and made me realise how rarely work is realistically represented in novels that are not explicitly about work). He gets a job as a menswear salesman, and the tedium, camaraderie, fear and occasional victories of working life are beautifully done. It has the ring of experience, as do Pinneberg’s struggles with fatherhood when (and just before) ‘the Shrimp’ is born: and my judgement on their authenticity is born of experience too.

The Shrimp screamed! The small bright room re-echoed with his screeching; his little voice was extremely loud and piercing. He was getting bright red. He’s got to draw breath some time, though Pinneberg.

There is comedy too – the essential comedy of hard times – with naturists, businessmen’s power struggles, and a surprising secret about Pinneberg’s mother. All that is seeded within the context of an immersive story, realistically appalling characters, and heartfelt empathy for the little man. Pinneberg buttonholes a famous actor who comes to the gentlemen’s outfitters, an actor in whose art he has found consolation, as millions of Germans would in Fallada’s book:

‘You know things aren’t going at all well for ordinary people like us, and it seems to me sometimes as though everyone and everything is making a monkey of us. Life in general, you see what I mean, and one feels so small…’

Included in this edition is an exemplary afterword by Philip Brady – at 20 pages, a mini-essay on Fallada and Little Man, What Now? which greatly enhanced my enjoyment of the book. It places the book in its social, political and literary context, and in a curious way was a highlight of my reading experience. As with their edition of Every Man Dies Alone, Melville House have done full justice to Fallada’s work.

One of the most affecting phrases in the book is not from the text of the story at all. After the slings and arrows suffered by Pinneberg and Lammchen (“Down the slippery slope, sunk without trace, utterly destroyed. Order and cleanliness, gone; work, material security, gone; making progress and hope, gone. Poverty is not just misery, poverty is an offence, poverty is a stain, poverty is suspect”) – after all this, after the relentless difficulty of everyday existence – particularly at this time, in this place – what most touches the heart is a chapter heading near the end of the book. it reads: “Epilogue: Life Goes On.”