My about-turn on books about Northern Ireland’s ‘Troubles’ – previously I shunned them; this year I’ve found myself very impressed by some – has borne mixed results. I was disappointed by Stuart Neville’s The Twelve – though, perversely, not as disappointed as I half-expected to be. This has been balanced by Liam McIlvanney’s All the Colours of the Town, a thriller with a solidity and wholeness which is also a portrait of two places and their people. McIlvanney is a regular contributor to the London Review of Books, and I’m willing to speculate (based on the novel’s Acknowledgements) that he is the son of William McIlvanney, whose Laidlaw series of crime novels have been raised on this blog twice. 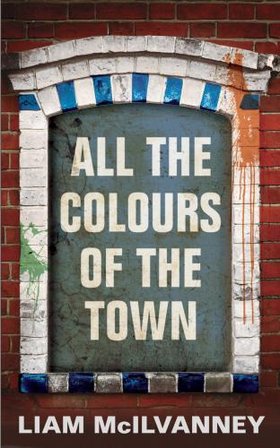 The two places in All the Colours of the Town are seen through the eyes of Gerry Conway, a hack for the Sunday Tribune, a fictional Scottish newspaper (but a real Irish one). Conway is scanning his emails when, amid the “flamboyant denunciations in wide-eyed capitals”, he comes across the journalistic grail: “not a sloppy wodge of comment but a hard bright newsy nugget.” It concerns the past life of Scottish Justice Minister Peter Lyons, a consummate politician “with his rational charm, his chatshow eloquence, his Mafioso neckties.” Conway “want[s] to know if a fact, properly planted and primed, could still make a difference.”

His investigation takes him from Glasgow to Belfast. The depiction of Glasgow is a refreshing change from low cloud and sooty tenements: “On sunny summer afternoons, Glasgow is Manhattan. The buildings instantly lofty, colossal. Black diagonals of shade bisect the traffic, cut across the cabs on St Vincent Street. The city looks like a photograph, black-and-white, something out of Berenice Abbott, Bleecker Street or Union Square.” Belfast is more instantly recognisable, not for its topography – “open, low, curled like a dog in its basket of hills … the hills, swelling dark at the end of each street” – but for its past, and the past’s reluctance to let the future in.

It was the omniprescence of the past – which back then, was not all that past – which led to my earlier reluctance to read books about the Troubles. Or, as one character in All the Colours of the Town puts it: “Jesus. Let’s get another round in before we depress ourselves to death.” Now, as in the book, those times are just sufficiently out of sight – even if only hidden – to be out of mind. Paramilitary murals have been painted over with broader cultural images, now incongruous amid dark ranks of terraces: now the murals are “something kin to miniature and implausible worlds of snow-domes … like a portal to a greener realm, a window on a technicolor Oz.” However, as Conway discovers, the past is not dead; it is not even past. Former terrorists have been released from prison, their newly peace-oriented organisations now awash with cash:

“All these grants and subventions. Funding schemes for community projects. Let’s call it what it is. It’s a bribe: we’ll give you money if you keep on not killing people. … These fucking raging egos. They’ve got no trade, no skills. They’ve never worked a day in their life, most of them. And they think they’re owed, for the time they’ve spent in jail. Me, I think jail time’s what you pay for the stuff you’ve already done.”

This wouldn’t be a thriller without some of Conway’s Belfast contacts turning out to be dangerous, and there is what one might call an acceptable level of violence: enough to raise the heart rate without straining the credulity. And although I tried hard not to get too hung up on factual niceties, there are a few clangers for Ulster readers among McIlvanney’s otherwise brilliantly presented geography and language of Belfast. Some of this is justifiable as artistic licence (the notion that Belfast Waterstone’s has a ‘Troubles’ section), though others could have done with a last run past an informed local (such as the odd place name, or the idea that an elderly working class Belfast woman would start a sentence: “Aren’t you a little…”).

Anyway the central story – spotted with coincidence but never too implausible – is not the only pleasure of the book. The atmosphere in the Tribune newsroom is perfectly judged, with its office politics, and journalists who simultaneously make high-minded complaints against editorial interference while queuing up to claim their expenses. The needlessness of most of our news is made clear, with even a dig (from Conway or McIlvanney?) at bloggers: “The whole dreary business of framing opinions. Was there anything less necessary than venting an opinion? Across the blogosphere, everyone with functioning forefingers was tapping out their prejudices.”

What McIlvanney has, most valuably, is a sense of balance and proportion, not only in the story, but in his language. The prose is distinctive and pleasing to the ear without being precious or delicate. (Conway is alive to the sounds of his home country: “As Catholics, we mythologised those places, spoke of them with a shiver of dread. Harthill. Larkhall. Crosskirk. Even the names had a spondaic bluntness, a fearsome Prod foursquareness.”) Similarly, Conway’s observations of other characters are memorable without being tricksily aphoristic. On his quarry Peter Lyons:

I’d noticed this about him, how he was always buying rounds, pouring wine, as if his continence wasn’t enough on its own; it needed the relief of the other guy’s indulgence.

It extends to Conway’s limited revelation of his own character, where we get a touching portrayal of parenthood in a couple of isolated paragraphs, and then just a sentence or two which might explain his marital breakup, where he blames his own children for his loss of temper: “I knew how quickly you could lose the rag. It was scary how abruptly I could turn.” This is what I meant earlier about the book’s solidity and wholeness: it covers so many aspects of its main character’s life without losing sight of its central mission. All the Colours of the Town is not the greatest book I have read this year, but nonetheless I am entirely sincere when I wish all debut novels could be as good as this.