I was saying earlier this year that publishers rarely reissue books in hardback; so, to prove me wrong, here’s another one. This book was previously published in English in 1995 by the redoubtable and much-missed Harvill Press (yes, they’ve been incorporated into Harvill Secker; but it’s not the same, is it?). Back then, it was titled Declares Pereira, a title which has been altered for this new Canongate edition. In the US, the title is Pereira Declares: a Testimony, so we have three titles all from the same translation. (Declares gives the title a pleasing internal rhyme which even the original – Sostiene Pereira – lacked.) The only book I’d previously read by Tabucchi was the novella Requiem, so I was glad of the chance to rediscover him.

Pereira Maintains (1994; tr. 1995 by Patrick Creagh) is a slim, subtle book, quiet but trembling with suppressed energy. The US subtitle (“a Testimony”), though unnecessary, helpfully reminds the reader that this is an account being rendered by the central character, being recorded by – whom? “Pereira maintains he met him one summer’s day,” it begins, and it is a meeting which will change Pereira’s life, and will lead to the present telling of his story.

We are in Portugal in 1938; Pereira is a middle-aged widower who talks to a photograph of his wife, and is in the market for new, stimulating company. He is a journalist on the Lisboa, a Lisbon newspaper, who has recently been put in charge of the new culture page. Still mourning his wife (“perhaps his life was merely a remnant and a pretence”), he reads in a magazine an extract from a university thesis on death, and decides that its author, a young man named Monteiro Rossi, will be perfect for the role of writing obituaries for the culture page. “Imagine if Mauriac were to die tomorrow, how would I manage?” However, he finds that Rossi is a politically committed young man, who produces pieces which cannot be used in the Lisboa.

Two years ago, in obscure circumstances, we lost the great Spanish poet Federico García Lorca. He was assassinated, and suspicion rests on his political opponents. The whole world is still wondering how such an act of barbarism could have been perpetrated.

The Lisboa prefers to remain studiously silent on the actions of Portugal’s Salazarist regime, to whom “Lorca was a traitor”. Rossi’s girlfriend Marta, equally opposed to the government and its support of Franco in Spain, observes to Pereira: “You know, I bought the Lisboa today, it’s a pity it doesn’t mention the carter the police have murdered in Alentejo.” Pereira’s embarrassed half-apology – “the editor-in-chief is on holiday … I am only responsible for the culture page” – is the first birthing pain of his own political awareness.

Pereira tries to carry on as normal – “the problem is that the whole world is a problem and it won’t be solved by you or me”, he tells Rossi – but finds himself unable to break off contact with the young couple. Perhaps it’s because Rossi is “about the age of our son if we’d had a son,” Pereira tells his wife’s photograph. He doesn’t see “how [Rossi and Marta] can influence me … they’re just two benighted romantics without a future, if anything I ought to influence them.” He longs to speak to his priest, “because to him he’d have been able to confide that he wanted to repent but didn’t know what he had to repent of.” He tries to relax by translating stories for the culture page (stories about repentance), by going to a health spa or visiting an old friend, but the subject he is trying not to think about comes up again. “Public opinion counts for nothing,” his friend Silva tells him. It’s “a gimmick thought up by the English and Americans … we don’t have their traditions … we’re a southern people, Pereira, and we obey whoever shouts the loudest and gives the orders.” 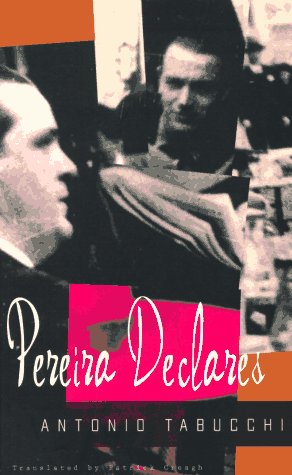 The thin thread of Pereira’s story unwinds beautifully, the recurring people and events – exchanges with his caretaker, omelettes aux fines herbes at the Café Orquídea – lulling the reader into believing that nothing will really change. Just as the regime censors dissent, Pereira’s testimony limits our knowledge of his interior torments. We are, of course, reminded that this is a partial account by the refrain – he maintains (or he declares for readers of other editions. A find-and-replace fail in the Canongate edition has left one ‘declares’ in place).

Pereira fell asleep almost at once. And he dreamt a lovely dream, a dream of his youth. He was at the beach at Granja, swimming in an ocean for all the world like a swimming-pool, and on the edge of the pool was a pale-skinned girl, waiting for him and clasping a towel in her arms. Then he swam back, but the dream went on, it was really a beautiful dream. But Pereira prefers not to say how it went on because his dream has nothing to do with these events, he maintains.

‘These events’ are revealed by the end of the book, but to whom is Pereira giving his account? The repeated riff of ‘he maintains’ conveys an attempt to persuade us that his version is true, and as such creates uncertainty. Is the uncertainty suggestive of deception, or merely the uncertainty of memory? Pereira’s story is told in the present describing the past – but what is yet to come? The reader, shamelessly engaged with our hero, can only hope when we learn that “he felt this deep yearning, for what exactly he cannot presume to say, but it was a profound yearning for a life that was past and for one in the future, Pereira maintains.”