It’s typical of my wrongheaded priorities that the only time I’ve been inclined to read a book by Daphne du Maurier – author of Rebecca! Creator of The Birds! – was when I saw a book of her stories issued in Penguin Modern Classics. That volume – Don’t Look Now and other stories – was a collection published in her lifetime (original UK title: Not After Midnight). Other than the title story, I had mixed feelings about it. Now the du Maurier estate have clearly decided to have another crack at my defences, with a double whammy of a selection of her stories chosen by Patrick McGrath, and published by NYRB Classics. 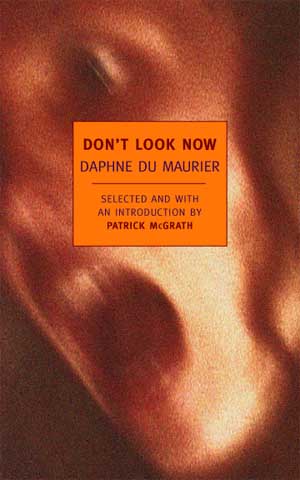 I felt the stories here – nine of them, filling 360 pages – to be of better quality than the Penguin book – which they well might be, as a sort of best-of. Having read the title story, I can see why the film it inspired – which I haven’t seen – is so famous (and not because of the realistic sex: none of that between these covers): it’s brilliantly creepy and sinister, wonderfully reducing Venice from city of romance to a tawdry, soiled backdrop for cruelty and paranoia. I knew the vague bones of the story – dead child, couple go on hols to recuperate, spooky goings-on, child in red cloak omnipresent, lots of water – and that’s all you need to know too if you’re a newcomer like me. The opening line is good:

“Don’t look now,” John said to his wife, “but there are a couple of old girls two tables away who are trying to hypnotise me.”

– and, cleverly, is actually a joke and not a sinister opening … only for it to become sinister very quickly. The only weak point is the very last sentence, which risks reducing the whole thing to bathos – it’s very badly judged and should have been removed, leaving the penultimate sentence to do its unsettling work.

Du Maurier’s other most famous story, ‘The Birds’, comes next. It’s a story that’s hard to come to fresh, so famous has the Hitchcock adaptation become (achieving the sort of cultural osmosis so that even people who haven’t seen the film know what it’s about). This doesn’t matter, as it’s quite different, and better, in written form. The build-up of atmosphere is superb, and it ends up a Wyndhamesque thing, bleak, apocalyptic and really quite frightening. And English. As with Wyndham, too, du Maurier’s characters tend to be stout, hearty types, everymen to whom strange things happen. McGrath in his intro calls ‘The Birds’ “a starting point in the popularisation of an entire genre of environmental-catastrophe narratives” – or perhaps not quite the starting point, as it was published a year after The Day of the Triffids. (‘The Birds’ in fact exceeds Day of the Triffids as a concept – where Wyndham had to blind everyone to make plants threatening, flying creatures with sharp beaks need no such assistance.)

Endings are one of the strengths of du Maurier’s stories, particularly when they open the story up further rather than closing it down. This is exhibited well in ‘Blue Lenses’ which, like many of the stories here, could be summed up in a single sentence, a high-concept pitch. The one where the birds start attacking people. The one where the woman gets her sight back but... This simplicity in summary risks making them seem one-dimensional, and some of the time I couldn’t help thinking that critics were right when they “dismissed with a sneer” her work, as du Maurier unhappily put it. Like Nevil Shute, she is a popular writer with just enough critical kudos to drift in and out of print.  But there is more here too. ‘Blue Lenses’ has a faintly silly premise, but it succeeds where others do not because it offers not only an indication of life extending beyond the story (the last lines are deliciously suggestive) but beneath the story too.

‘Split Second’, by contrast, spends most of its 55 pages treading water so that the characters can gradually catch up to what the reader had worked out early on (in fact they never do quite catch up). The same goes for ‘Escort’, a moment of crisis on a wartime ship. In a way this playing for time is a necessary motif of suspense stories – the slow building of atmosphere is an essential element of such work, and in that sense requires a little length to get going – but the problem is expectations. The sort of supernatural or sci-fi elements that arise here might be surprising in a story read out of the blue, here we know that in a du Maurier story that sort of thing is de rigueur, and so I just kept thinking, ‘Get on with it!’

Some of the stories resemble Roald Dahl’s adult fiction – his ‘Tales of the Unexpected’ – though lack his skittish charm. Du Maurier wrote her short works throughout her writing life, between the 1920s and the 1980s, but all have a period feel, slightly fusty and formal. Weakest of all are a couple of early works, a dozen pages or less each and pretty unmemorable.

However the last story, and longest at 80 pages, ‘Monte Verita’ is every bit the equal of ‘Don’t Look Now’ and ‘The Birds’ – and even, with its novella length, has the scope to dig a little deeper than those, and be more unusual still. Instead of Roald Dahl I was reminded of Stefan Zweig – story of two obsessions, one we can see the workings of and one we can’t. Like the others, it is best discovered page by page, so I will say nothing more of it, or of the book, except that now I’ve covered a selection of du Maurier’s short fiction, all I need now is to find a way into her novels. Any recommendations?