Yann Martel’s new novel comes with two kinds of expectations. First, those created by the bestselling Booker winner in the history of the prize, his previous novel Life of Pi. Then there are the expectations that come from several highly negative reviews in other countries, where this book has already been published. (“Fundamentally misconceived” is a kinder comment from one.) My inclination to give an author the benefit of the doubt (why not, when they spend a few years on a book and we spend only a few days on it?) means these brickbats make me want to like the book, through sheer perversity if nothing else. In the UK, Canongate has given the book a luxurious treatment – sewn-in ribbon bookmark, illustrated boards – which enhance its status as a Big Release and make it, in a bibliophilic sense at least, a pleasure to read.

Beatrice and Virgil has been a long time coming – eight years since Pi.  When I was younger (and more naive), I thought a long gestation period meant the writer was crafting an epic, polishing a masterpiece.  Now I know it’s more likely to mean that the book didn’t fly, and had to be scrapped, or undergo major furnace work.  There is little doubt that the latter is what happened here. Martel had planned a novel like this, a Holocaust allegory featuring animals, back while Pi was the toast of the literary world:

[N]ext project is an allegory of the Holocaust featuring a monkey and a donkey. It will be set on a country (with trees, rivers, etc) that is also a shirt.

It sounds grim, but I want to create a portable metaphor for the Holocaust that we might apply in other circumstances, such as Rwanda.

(It does sound grim, but not in the way he meant.) However Martel got stuck, and the opening of Beatrice and Virgil (the names of the donkey and monkey in question) relates a version of how this happened. In the book, the Canadian author of the highly successful second novel about animals is called Henry, and he plans his follow-up as a flip-book, one of those back-to-back reversible volumes which contains two books in one. They would comprise a fictional allegory of the Holocaust, and an essay on the subject. He has many good reasons for doing this – it’s a clever idea – but we are told how Henry’s publishers balk at the idea, send him off to rework it, or get rid of it. As a reader with a good deal of interest in writing about writing (and writing about publishing), I liked this introduction. However here we also get the first doubtful use of the Holocaust in Beatrice and Virgil.  We are told that fewer than two per cent of Holocaust survivors ever tell of their ordeal. And so:

For his part, Henry now joined the vast majority of those who had been shut up by the Holocaust.

Oh really? This author of a “fundamentally misconceived” idea he couldn’t let go of, being given sage advice by his publishers – save yourself, save your reputation, the idea is terrible, the book is a car-crash – is now comparing himself to those who suffered in the Final Solution? Elements like this challenge the reader’s attempt to give the book a fair hearing.

Henry, seized by writer’s block, shifts to another way of living: becomes a father, works in a coffee shop, distracts himself from his difficulties. The fan letters for his previous novel keep coming, though, and one letter contains an odd note (“I read your book and much admired it. I need your help”) accompanied by two texts. They are the Flaubert story ‘The Legend of Saint Julian Hospitator’ and a scene from a play which explicitly recalls Waiting for Godot. It was at this point that another doubt struck me. Beatrice and Virgil is a short book – barely 200 pages – but there is a lot of padding. Martel takes twelve pages to excerpt and paraphrase Flaubert’s story, and another seven on the Beckett pastiche. (Together, that’s 10% of the book.) Once I noticed this technique, it was everywhere: another seven pages on describing the art of taxidermy, two on a list of stuffed animals in a shop, and so on. 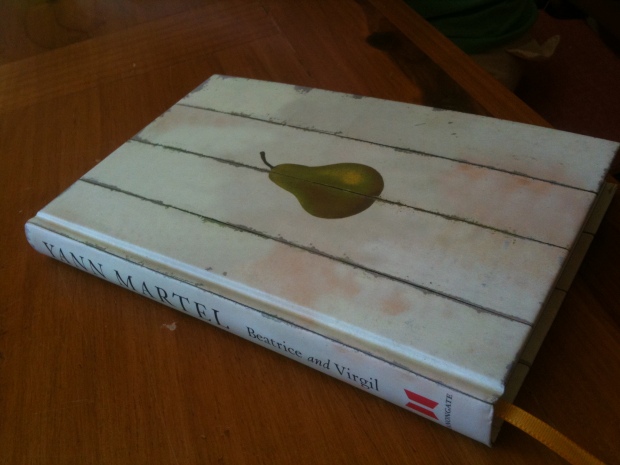 The animals are stuffed by the author of the Godot-like dialogue, the fan who sent Henry the letter and the story.  He is a taxidermist, also called Henry, who has been writing a play which is (where’s that interview again…?) “an allegory of the Holocaust featuring a monkey and a donkey … set on a country that is also a shirt”. Beatrice and Virgil. We have a story within a story which is a refracted version of real life: like Martel’s intentions for his original book. The scenes from the play come frequently from here on, and it must be said that as Beckett pastiche, they are pretty good: stark and funny and desperate. But pointless. The Holocaust current is frequently in evidence:

VIRGIL: How can there be anything beautiful after what we’ve lived through? It’s incomprehensible. It’s an insult. Oh, Beatrice, how are we going to talk about what happened to us one day when it’s over?

It’s an insult? You said it. Henry (who is stuck with his play) tells Henry the author that he became a taxidermist “to bear witness”. To emphasise the point, within the play, comparison is drawn between the Holocaust and the mass extinction of animals under man. Donkey plus monkey equals turkey.

But tacking horrendous reality onto a silly story (and you ain’t seen nothing until you get to the thirteen cards of ‘Games for Gustav’ that close the book) is not Beatrice and Virgil‘s only, or even main, problem. It’s a confused mess. Martel never seems to get a clear run at what he wants to say, or gives any indication that he knows what that is. One of a novelist’s greatest gifts should be to hide from the reader the furious toil that goes into writing a book, to make it appear as though it was published just as it was conceived. But in Beatrice and Virgil, the effort, the edits, the repeated returns to the drawing board, are all visible, a palimpsest on the page. In fairness to Martel, he has self-awareness, and there are repeated references in the book that suggest he knows what a failure it could be interpreted as. His intentions no doubt are good, but even a donkey knows where good intentions lead. It’s a terrible shame when the most positive response you have to a book is pity: not for the characters, but for the author.