Evan S. Connell’s ‘most famous’ novel is, on the surface, less turbulent than The Diary of a Rapist, which I wrote about a couple of years ago.  It’s hard to see why this book is out of print in the UK, being a portrait of quiet desperation almost as accomplished as the sort of thing people fete Richard Yates for.  (Or William Trevor, come to that.)  Classics imprints, where are you?

Mrs Bridge (1959) was Connell’s first novel. It is a sort of pointillist portrait of a woman, told in over one hundred brief and discrete (but broadly chronological) sketches, most only a page or two long.  (There’s a later, longer, companion novel, Mr Bridge.)

Throughout the book she is ‘Mrs Bridge’. “Her first name was India – she was never able to get used to it. It seemed to her that her parents must have been thinking of someone else when they named her. Or were they hoping for another sort of daughter?” So, Mrs Bridge it is, and this is as good a shorthand as any to sum up her personality and life: timid, stunted, any explorations into thought and unconventional behaviour quickly snuffed out by fear, or a sense of propriety, at least to begin with. “Appearances were an abiding concern of Mrs Bridge.”

But tentative struggles away from her own limited life do occur.  Indeed, they are the key to the book, and are generally inspired by Mrs Bridge’s friend Grace Barron. “India, I’ve never been anywhere or done anything or seen anything. I don’t know how other people live, or think, even how they believe. Are we right? Do we believe the right things?” Mrs Bridge might be wary of pursuing such questions far herself, given the unhappiness such introspection brings Grace. “Have you ever felt like those people in the Grimm fairy tales – the ones who were all hollowed out in the back?”

Mrs Bridge has her husband – ‘Mr Bridge’ – and her three children, Ruth, Carolyn and Douglas. Her children threaten Mrs Bridge’s equilibrium, as in the extraordinary scenes where Douglas, like Jocelin in Golding’s The Spire, begins to build an enormous tower from scrap in the family garden: a metaphor for the everyday tragedy of children growing away from their parents’ reach. As Ruth grows away from her – as children must – Mrs Bridge wonders, “Are you mine? Is my daughter mine?” 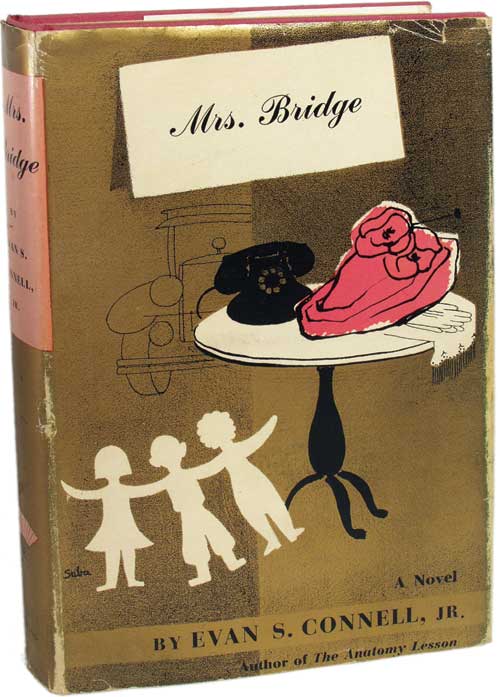 She is scandalised but fascinated by a production of Tobacco Road, and a visit to Europe becomes a highlight of her life, to which she still refers many years later. It is during the trip that one vignette seems to sum up one aspect of her character neatly, so I reproduce it here in full:

Before leaving on the trip she had checked over the luggage in the attic and concluded they did not have enough, so she had gone downtown and bought three elegant, darkly burnished leather suitcases. They were so beautiful that she was easily persuaded by the salesman to buy a set of canvas covers to protect the leather. These covers, to be sure, were ugly – as coarse as Boy Scout pup tents – but she bought them and had them fitted onto the suitcases. The covers remained on the suitcases while they were aboard ship, and as they had been in each city only a few days she had not bothered to remove them, but now she decided to see if the leather was being protected. She unfastened one of the canvas jackets, peeled it halfway off, and there – as beautiful as though still on display – the leather gleamed. Well pleased, she buttoned the cover.

The difficulty with this sort of portrait is that it’s all too easy for the author to appear to be mocking his subject. Connell avoids this by giving Mrs Bridge increasing self-awareness, and urgings to spread her wings, as the book proceeds. Seeds are planted for some kind of breakdown – when returning from her trip and sharing the platitude that “there’s no place like home”, Mrs Bridge is “troubled and for a moment … almost engulfed by a nameless panic.”

Mrs Bridge is a depiction of a person whose subsumed desires, hopes and yearnings are rendered hopeless by her upbringing, her social position, and her personality. The miniature scenes are perfectly rendered, and so neat that the reader has to work to see the thrashing life beneath the surface. The ending is memorable though, and at times the book and the life seem so closely twined that it’s hard to tell them apart.

They had started off together to explore something that promised to be wonderful, and, of course, there had been wonderful times. And yet, thought Mrs Bridge, why is that we haven’t — that nothing has — that whatever we — ?