My ongoing issues with availability of time to read and review are so well-rehearsed here that I’ve begun to bore even myself. I mention them once again only to explain why I’ve decided to take a page from Trevor Berrett’s blog and review a short story. I’ve done this once or twice before, but only when the story was published as a standalone volume. There are compelling reasons to do this, I think, other than the necessity of time constraint. Many stories deserve consideration at full length and can serve as a window to an author’s work generally. The corollary is that it’s difficult anyway to review an author’s collected stories effectively. Is it possible even to read them effectively, when the tics of any author will start to seem pathological over (in this case) 650 pages? 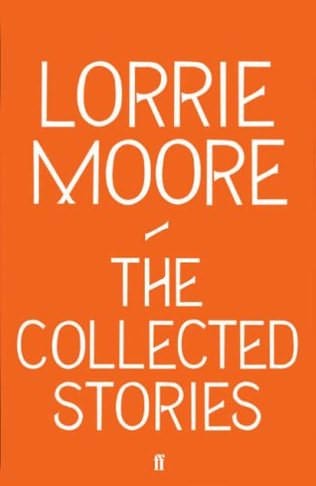 All this is relevant because I read ‘People Like That Are The Only People Here’ precisely because of the opposing responses it’s received. When I mooted reading some Lorrie Moore on Twitter, one reliable reader singled out the story as a must-read. This reminded me that another reliable reader, Adam Mars-Jones in his critic’s garb, had highlighted it in his review of Moore’s Collected Stories as “the most mannered and posturing thing in the book.” (He makes it clear that this stands it against some pretty stout competition.) They might both be right. Another tweeter observed that ‘Peed Onk’ (let’s call it that from now on: short, and no mistaking it for anything else) is “as good a case for the prosecution as for the defence. It’s very ripe.”

It sure is. ‘Peed Onk’ – at 34 pages, one of Moore’s longest stories – is about a baby with cancer, or in fact it’s about his mother. It’s also full of jokes and wisecracks – both distinct from comedy. This is where Mars-Jones takes issue with Moore, not just in this story, but generally: her humour is “closer to a compulsion than a talent.” There is some truth in this. Any story about childhood cancer is going to promise hard going, and it’s a promise – or threat – that the reader largely wants to see fulfilled. Terrible things happening should be terrible to read. So when the predominant tone of the narrative is jaunty – the sentences stabbed with exclamation marks – it risks making the reader too comfortable. You could end up with something like Emma Donoghue’s Room, robbed of force by the narrative constraints the author has placed on her story. Here, however, I think Mars-Jones’s concerns are unjustified. The mother is thinking and speaking in this way, surely, as a coping mechanism for the worst horror that can strike a parent. Indeed, if it’s correct that the story reflects events in Moore’s own life, then the jokes, the tone, the story itself may be entirely real instances of the coping mechanism in operation.

This quality is there right from the title (on which generally I agree with Mars-Jones: “Moore never seems to have found a title arch enough to satisfy her, but surely this time she comes close”). Here, ‘Peed Onk’ is what everyone in the hospital calls the unit for Paediatric Oncology. A wise barrier to erect, from two of the worst words in the language to two of the cutesiest: ‘Peed Onk’ sounds like an exclamation from In the Night Garden. The parents here, and the children too, need all the cushioning they can get while they adjust to the new reality. “Everyone admires us for our courage,” says one father. “They have no idea what they’re talking about. Courage requires options.”

The charge of excess whimsy is addressed too by the fact that the tone of the mother’s thoughts is often closer to hysteria than to humour. And even within the jokes, there is darker truth: a parent’s fear of their child falling sick, yes, but also of not being a good enough parent in the first place, of not always putting first the child now at risk of being lost forever.

Perhaps, she thinks, she is being punished: too many baby-sitters too early on. (“Come to Mommy! Come to Mommy-baby-sitter!” she used to say. But it was a joke!) Her life, perhaps, bore too openly the marks and wigs of deepest drag. Her unmotherly thoughts had all been noted: the panicky hope that his nap would last longer than it did; her occasional desire to kiss him passionately on his mouth (to make out with her baby!); her ongoing complaints about the very vocabulary of motherhood, how it degraded the speaker (“Is this a poopie onesie? Yes, it’s a very poopie onesie!”).

This may be where the experience that the reader brings to the story is relevant. I have never knowingly opened a sentence with the words “As a parent”, but I did wonder if my own position – having two young children I could mentally put in the place of Baby in the story – added piquancy to the whole thing. The fact of feeling a more emotional draw from a story because of association with the characters may well be a failure of imagination, but subjectively, at the time, it feels like an expansion of it.

Moore certainly passes up no opportunities to invite the reader’s empathy and association. There is pathos aplenty, right from the moment at the beginning of the story when the mother discovers blood in the baby’s nappy, “like a tiny mouse heart packed in snow.” She asks, “How can it be described? How can any of it be described?” but ineffability is not Moore’s way. And it is effective and efficient, this targeted aim at the heart of the reader. What parent, what human, cannot feel the twinge when the mother whispers into the baby’s ear, “If you go, we are going with you. We are nothing without you.”

Yet it is also this direct appeal which is Moore’s biggest weakness. After ‘Peed Onk’, I read two more stories as recommended to me: ‘Dance in America’ and ‘You’re Ugly, Too.’ These also are very good stories, thoroughly funny and unmistakably sad, and made it certain that I will read more. But like ‘Peed Onk’, they seem to have the author’s thumb on the scales, too obviously directing the reader. There’s evidence of control-freakery, a determination on Moore’s part to steer the reader’s understanding of her characters via pithy insights. In ‘You’re Ugly, Too,’ we’re told on the first page that the main character was “almost pretty, but her face showed the strain and ambition of always having been close but not quite.” This, to my tastes, is too neat: now that the reader has been told this, how can they make up their own mind? And when Moore adds that the character wore novelty earrings “no doubt for the drama her features lacked,” that no doubt makes it clear that the observation must be coming from the writer rather than the character herself. Author, step back, let go! Similarly, the anecdotes and just-so details around the characters come worryingly close to quirkiness.

Yet this is clearly something which others not only value but consider one of Moore’s finest attributes. Critics whose praise features on the cover of The Collected Stories say “Moore’s stories pack more wit and tragicomic power into a single paragraph than most novels manage over fifteen chapters,” and “Every line feels crafted, cared about, subjected to crash-testing, really meant.” To me, these threaten unwelcome claustrophobia. The signposts to the reader – laugh here, cry now – are made all the more glaring when you read three stories and all feature serious illness: childhood cancer, cystic fibrosis, mysterious growths. What easier shortcut to the reader’s sense of significance could there be?  Still, Moore shows that there is pleasure to be had in all this pain: within these parameters, the stories are a delight to read. And here, also, is one area where Moore’s nemesis Mr Mars-Jones can’t crow: most of his fiction has been set around sickness too.