Before Denis Johnson became the Don DeLillo of the noughties (I’m thinking of his unfinishable fat novel Tree of Smoke), he was, apparently, a poet and a short story writer. This, his only short story collection, is unfathomably out of print in the UK. 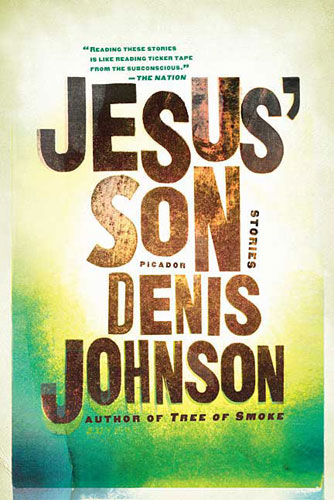 Jesus’ Son (1992) has perhaps as much claim to be a novel as a collection of stories. The eleven short fictions here have unity of theme, setting and character (all have the same narrator). It also has a consistent sensibility: the telling is clear but confused, as befits a teller who is a recovering alcohol and heroin addict – though at times we’re not quite sure just how recovering he is. Although the narrative is fractured, or at least threateningly weakened in places – for example, a character who dies in one story is alive again in the next – our man is not a consciously unreliable narrator: he tries honestly to convey his impressions, but sometimes fails. This is beautifully displayed, and helps make the whole cohere, at one particular moment. The second story, ‘Two Men’, begins “I met the first man as I was going home from a dance at the Veterans of Foreign Wars Hall.” The narrator proceeds to relate his story, and by the time he gets to the end, we have forgotten the title and the beginning. Later in the collection, the story ‘The Other Man’ begins, “But I never finished telling you about the two men.” This was not the moment when I decided that Jesus’ Son was a work of some brilliance, but it put the tin hat on the conviction.

The nameless narrator drifts as a way of life, “sick of myself and full of joy”, and although he may be off the smack and booze, he’s not averse to a little prescription enlightenment (“The travelling salesman had fed me pills that made the linings of my veins feel scraped out. My jaw ached. I knew every raindrop by its name. I sensed everything before it happened”). His hyperawareness makes everything vivid, the real things (like a car crash) and the unreal:

“Are you hearing unusual sounds or voices?” the doctor asked.

“Help us, oh God, it hurts,” the boxes of cotton screamed.

He seems to be drawn to hospitals, whether seeking help (“When I coughed I saw fireflies”), or further chemical stimulation, or work. In ‘Emergency’, the centrepiece of the book and perhaps the strongest story (you can listen to Tobias Wolff reading it here), he is working at the hospital with another muddling soul, Georgie, and they head off together on a road trip. It’s appalling and funny, always at the same time, and the sudden uncertainties (“Or maybe that wasn’t the time it snowed”) help bring the reader into the narrator’s addled consciousness. “That world! These days it’s all been erased and they’ve rolled it up like a scroll and put it away somewhere. Yes, I can touch it with my fingers. But where is it?” The content, the plot, of the story is almost irrelevant; it’s a spillage of life on the page, seemingly random and shapeless but directed in a subtle and satisfying way. Which is not to say that Johnson is above more obvious pleasures:

“Are you still at all worried about Alsatia?”

“I was kissing her.”

“There’s no law against that,” Richard said.

“It’s not her lawyer I’m worried about.”

In these stories, the ordered and restrained lives of most of us are so far off the scale that they are invisible to the narrator. He may be having a terrible time where he is, but he is not especially interested in joining mainstream society. (“I didn’t want to go home. My wife was different than she used to be, and we had a six-month-old baby I was afraid of, a little son.”) He measures himself instead against those who are even worse than he is, such as the people in an institutional home whose deformities “made God look like a senseless maniac. […] You and I don’t know about these diseases until we get them, in which case we also will be put out of sight.” Or he likes to compare himself with Kid Williams, a former boxer.

He was in his fifties. He’d wasted his entire life. Such people were very dear to those of us who’d wasted only a few years. With Kid Williams sitting across from you it was nothing to contemplate going on like this for another month or two.

Going on is really what Jesus’ Son is about: going on whatever the future holds, even without a future, because the alternative is unfaceable. (Though here there is no explicit acknowledgement of that unnamable factor. He can go on because he does because he can.) Life is life; here the achievement is not staying on the level, but understanding your lot and living it. One man in the Beverly Home has a condition which renders him twisted, in “perpetual spasm”. “No more pretending for him! He was completely and openly a mess. Meanwhile the rest of us go on trying to fool each other.” There is no self-pity or gloom here, however. “How could I do it,” he asks when spying on a woman through her window, “how could a person go that low? And I understand your question, to which I reply, Are you kidding? That’s nothing. I’d been much lower than that. And I expected to see myself do worse.” To which we reply: you will, sir, you will.